The recent report by the UN High Level Expert Group (HLEG), led by Catherine McKenna, sets plans for mandatory reporting on NetZero commitments, but a Finnish materials study by Simon Michaux shows that Net Zero commitments cannot be met, making the report and its recommendations a ‘boom and fizzle,’ says Friends of Science. 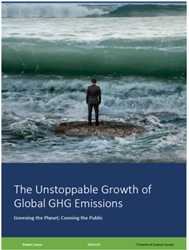 THE UNSTOPPABLE GROWTH OF GLOBAL GHG EMISSIONS – Greening the Planet; Conning the Public

As reported by the National Observer, Nov. 08, 2022, the UN High Level Expert Group (HLEG) led by Catherine McKenna, claims to outline a credible plan to achieve net-zero greenhouse gas emissions to prevent greenwashing, but Friends of Science says the UN HLEG forgot to do a feasibility study; a Finnish materials study by Simon Michaux renders the UN greenwashing report moot and a ‘boom and fizzle.’ Friends of Science Society expresses concern over the evermore tyrannical tone of demands for mandatory reporting and NetZero compliance, when it is a physical impossibility.

Presently Royal Bank of Canada is undergoing a greenwashing inquiry launched by Ecojustice. Friends of Science have issued an Open Letter to the Competition Bureau exposing the fallacy of the charges, one fact being that NetZero targets are unattainable, confirmed by Simon Michaux’s comprehensive study.

McKenna reported to the National Observer: “If you're going to make a net-zero commitment, you can't just say that you have a 2050 target; that's the easy part.”

As Roger Pielke, Jr. recently reported, the banking “Network for Greening the Financial System” (NGFS) group have been using implausible climate scenarios and falsely conflating extreme weather events as if evidence of climate change. Such attribution to human-causation or carbon dioxide is not supported by the data.

The CLINTEL group of more than 1400 scientists and scholars say there is no climate emergency; natural factors drive climate change. Therefore, NetZero targets are unnecessary.

Only JP Morgan appears to have done any kind of due diligence on NetZero implementation, as illustrated in Robert Lyman’s summary reports “Speed Bumps on the Road to Net Zero” and “Hazards Ahead.” JP Morgan’s CEO Jamie Dimon rejects the demands to stop funding fossil fuels.

In concert with the McKenna report and Mark Carney’s #GFANZ finance group, as reported by the National Observer on Nov. 02, 2022, the Canadian government is signalling that it wants to lock in Canada’s carbon tax rate permanently with a contracts for differences law. Former public servant and diplomat, Robert Lyman, says this is contrary to democratic principles and good government. This notion was floated at the recent “NetZero 2030. In Focus” conference, rebutted by Friends of Science Society’s “Too Far. Too Fast.” presentation.

Simon Michaux is Associate Professor of geometallurgy at the Geological Survey of Finland. In a recent webinar through the University of Queensland, Michaux reports that while nations, banks and industry have widely adopted NetZero targets, there have been no serious feasibility studies.

Michaux found that the amount of copper required would be 4.6 billion tonnes. Based on global metal production (2019) of copper which was 24 million tonnes, it would take 190 years to produce the necessary copper. For lithium, to produce the required amount would take 9,900 years. Likewise, all this work would require enormous amounts of fossil fuel energy, which McKenna and other climate activist groups say must be phased out or severely limited immediately.

Robert Lyman’s report “The Unstoppable Growth of GHG Emissions” shows that built-in to the original UN Framework Conventional on Climate Change (UNFCCC), upon which the Paris Agreement and present COP27 negotiations are based, are clauses that allow developing nations to emit without restriction in perpetuity. Thus, the West is committing economic and energy suicide while chasing unattainable climate goals.

Speed Bumps on The Road to Decarbonization – Part 1 summarizing the findings of JP Morgan's long-time analyst, Michael Cembalist.Robert Lyman provides a 'plain language' summary of JP Morgan's report which examines the technological and economic barriers to the goal of decarbonization.