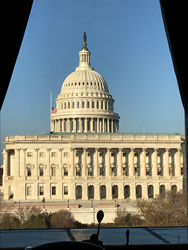 The New Year is getting off to a great start for professional photographers and other visual artists.

Movement was made on two fronts in Washington D.C. in regards to PPA's proposed changes in U.S. copyright law. First, House Judiciary Committee Chairman Bob Goodlatte (R-Va.) and Ranking Member John Conyers, Jr. (D-Mich.) released the first policy proposal to come out of the committee’s review of U.S. Copyright law. According to a released statement, the policy proposal includes “granting the Copyright Office autonomy with respect to the Library of Congress, requiring the [U.S. Copyright] Office to maintain an up-to-date digital, searchable database of all copyrighted works and associated copyright ownership information, and many others reforms” including a small claims process for copyright infringement. On that latter subject, the policy proposal states, “The Copyright Office should host a small claims system consistent with the report on the issue released by the Copyright Office. The small claims system should handle low value infringement cases as well as bad faith Section 512 notices. The Register should be given the authority to promulgate regulations to ensure that the system works efficiently.”

Meanwhile, also in the House, Representative Judy Chu (D-Ca.) and Co-Sponsor Lamar Smith (R-Tx.) have introduced the “Fairness for America’s Small Creators Act”, a “small claims bill” backed by PPA and the Visual Arts Alliance, that would make it possible for small business image creators (i.e. professional photographers) to take advantage of the U.S. copyright system for the first time since its inception. This small claims bill would provide creators with a remedy to protect their works, and make sure that they are paid for what they produce. The bill establishes a tribunal made of two attorneys with extensive intellectual property (IP) and/or copyright backgrounds and a third arbitrator familiar with U.S. Copyright law, who would oversee the new small claims process for infringement remedies. In the U.S., Copyright claims have traditionally only been allowed to be filed in person in federal court. The “Fairness for America’s Small Creators Act” allows for those whose work has been infringed to file a claim online and the corresponding hearings will be held via video conference without the requirement of an attorney. Under the “Fairness for America’s Small Creators Act”, copyright claims can be filed without prior registration with the Copyright Office; However, registration must be completed before the tribunal gives their decision. The cost for this process is set to be kept to a minimum, but is still being decided on at this time. The maximum recovery amount is set at $30,000, ensuring that small creators have a place to remedy their copyright infringements, but also preventing the tribunal process from being clogged. According to the bill, those who wish to pursue their copyright claim in federal court may still do so, and it will be noted that the parties opted out of the small claims option.

“The New Year couldn’t get off to a greater start for professional photographers and other visual artists,” says PPA CEO, David Trust. “These are two giant announcements. The reform of the U.S. Copyright Office, including modernization of the office and the registration processes, has been one of PPA’s biggest advocacy issues over the past 10 years. The current one-size-fits-all registration system simply doesn’t work for professional photographers. This didn’t matter as much, however, because of the lack of a small claims process. Now, in one day, we have movement on both issues. Just as important as the introduction of Representative Chu’s small claims bill, is the statement released by Chairman Goodlatte and Ranking Member Conyers. It’s an indication that they really want to get this done. December 8, 2016 will stay as a big day for U.S. Copyright Law!”

The timing, a flurry of activity all seemingly in one day, coincides with the end of this Congress’s 2016 lame-duck session. PPA will continue to work with the incoming Congress and actively engage with House members as it also mobilizes its 30,000 photographer members to reach out to their respective Representatives and lend their support to this new piece of legislation in 2017.