On the 60 minute podcast, Feldman dropped first hand knowledge of the pedophilia he declares runs rampant in Hollywood. 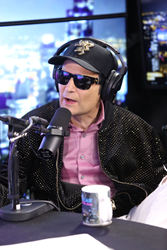 This is a very dangerous project, because everything we say is the truth and it can be proven

Next News Network anchor Gary Franchi hosted Hollywood Icon Corey Feldman on his podcast THE G-CAST just before box office sales of Feldman’s new documentary’s tickets went on sale. Feldman, known for films such as THE LOST BOYS, GOONIES, STAND BY ME and many more, discussed his upcoming film (MY) TRUTH: THE RAPE OF THE 2 COREYS.

On the podcast Feldman provided details about his controversial new documentary where he will expose yet another known Hollywood player who used underage actors for disturbing sexual acts. On the 60 minute podcast, Feldman dropped bomb after bomb of in-depth knowledge of the pedophilia that he declares runs rampant in Hollywood.

Corey Feldman, best friend and peer of late actor Corey Haim, made a promise to Haim that he would expose the truth about what he went through. On March 9th, the 10th anniversary of Haim’s death, the film will name the specific person who raped Haim and dive further into details about the abuse they both suffered.

Building up to the film, Feldman began working diligently to develop a movement of awareness via the hashtag #Kids2, reminding social media that kids are frequently taken advantage of in Hollywood.

Feldman and his wife Courteny detailed to Franchi and his co-host wife Angie that the film has taken a large amount of hard work and dedication with legal battles and threats against Feldman’s life and family, but he has persisted in hopes of ending the constant cover up of Hollywood’s largest pedophile ring and is committed to protecting children across the globe.

“This is a very dangerous project, because everything we say is the truth and it can be proven” stated Feldman. “As survivors of abuse, we are able to speak directly to the world.”

The film “My Truth: The Rape of 2 Coreys” will be available via a one-time
showing exclusively at MYTRUTHDOC.com for $20.

SECURE TICKETS TO FELDMAN’S DOCUMENTARY:
“(MY) TRUTH: THE RAPE OF THE 2 COREYS
HERE:
https://www.mytruthdoc.com

Since 2012 Gary Franchi has been the lead anchor for the youtube channel “The Next News Network” with over 1.31 million subscribers, and over 1 billion views. He co-hosts “THE G-CAST” alongside his wife as a longform weekly podcast where they both feature special guests, cover current events, culture, and a variety of human interest stories. THE G-CAST can be seen weekly on YouTube.