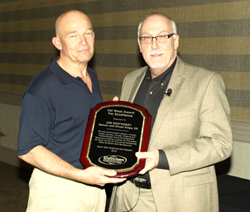 “It takes incredible dedication and hard work, coupled with leadership and management skills and a true sense of community service to be successful in this business,” said Randy Wright.

The winners, from Denver, New Orleans, Cincinnati, Greenville, SC, and Columbia, SC, represent “the best of the best,” according to Cottman President Randy Wright.

Jim Dietvorst, a multi-center owner in Colorado, received the Cal West Award, Cottman’s most prestigious honor named for the owner of the Cottman center in Gretna, La. who, over 20 years, set the highest standard.

“This award is presented to the person who, over a period of years, consistently demonstrates integrity, success, honesty, courage, loyalty, diligence, and trustworthiness,” said Wright. “The great work Jim and his team have been doing representing Cottman of Denver and nearby Wheat Ridge, CO, fulfills all of those goals. Jim is truly one of the best operators in the business today. He has always been there, not only for his brother and sister franchisees, but for the system as a whole. Jim’s stores are a reflection of his dedication and devotion to his trade and to the Cottman brand.”

The Cottman Man Award, given to the franchisee with the highest gross sales for the previous year, went to brothers and partners Randy and Rusty Cato who operate the Cottman Center on Erhardt Blvd. in New Orleans. They recently completed a total remodel of their center.

The Founders Award, named for Cottman founders Michael Ambrose, Ed Kelly, and Jim Corkan, was given to Chandler Beachum, Cottman of Greenville, SC. Given to an individual who has overcome adversity, Beachum was named this year’s recipient for his accomplishments over the past two years even as he battled severe health issues. Since buying his location two years ago, he did a total makeover of his center, developed a new and dedicated staff, and became one of the chain’s top-performing centers.

Nick Carpinello, Cottman of Cincinnati, OH, was named The Transmission Physician. He takes great pride in his center’s performance and relationship with its customers, which is evident in the lack of complaints his center receives and its sales success. Carpinello also devotes time representing his fellow franchisees as an Strategic Planning Committee member and helping with the integration of the company’s Cottman Business Management System program.

Manager of the Year, one of the chain’s highest honors, was presented to Cory Heiman, Cottman of New Orleans, LA. Heiman exemplifies the highest standards in professionalism, dedication, and sales. Since his arrival, the New Orleans center has consistently been an above-average performer. When the center was closed for several days last winter due to a heavy snow storm, he rallied his crew, who all came in on a Saturday, and managed to deliver more than fourteen thousand dollars to help make up for the loss earlier that week.

The Technical Proficiency Award is given to those technicians who have shown an exceptional technical knowledge of the automotive industry. This year it was awarded to Scott Wilson, Cottman of Louisville, KY, Ed Tinsman, Cottman of Feasterville, PA, Carlos Llull, Cottman of Gretna, LA, and Rick Barrett, Cottman of Des Moines, IA.

The Rookie of the Year Award is given to a new member of the Cottman Team who has shown outstanding drive and devotion. Winners Liz and Tony Foy, Cottman of Columbia, SC, take great pride in their center’s day-to-day operations, and they are the only center to score points in every contest category this year. Their center is immaculate and they have developed strong community relations, registered solid gross sales, and are active in every facet of their center’s operation.

“It takes incredible dedication and hard work, coupled with leadership and management skills and a true sense of community service to be successful in this business,” said Wright. “The recipients of these awards are outstanding examples of what is good about the service industry.”

With locations across the U.S. and in Canada, Cottman Transmission and Total Auto Care is an auto repair and transmission company for almost any make or model vehicle, foreign or domestic. Cottman Transmission and Total Auto Care continues to take claim of the growing $200 billion aftermarket auto industry, and specializes in complete transmission service, brakes, suspension, air conditioning service and much more. Cottman is based in Horsham, Pa. For more information, please visit http://www.cottman.com.