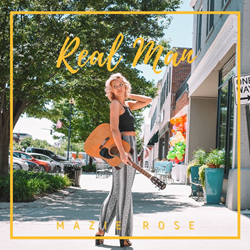 "After working extensively in the studio with [Mazie], along with our partner Dolly Parton and producer Kent Wells, we all agreed: This young woman is a superstar in the making." -Dave Fowler

Country music has a new girl in town. Madeline Dominique, or as she is known in the music industry, Mazie Rose, was born and raised on a farm in the small town of Swanton, Ohio. She attended St. Ursula Academy in Toledo for high school and graduated in 2015.

Mazie was plucked from oblivion in April of 2020, 21 at the time, when a cover video of hers made its way to Kent Wells, producer in Nashville Kent, who throughout his illustrious career has produced music for many country music superstars, such as Dolly Parton, calls Mazie an “unbridled superstar,” and invited her to come to his studio at Dark Horse Recording in Franklin, TN, just outside of Nashville. There, Mazie started cutting her new singles while impressing Kent and his team with her X-factor talent, outgoing personality, and kind heart. One song she cut was written and originally recorded by Dolly herself, Get Out and Stay Out. Mazie’s rendition of this song was her first release at the end of 2020 – you can listen wherever you stream your music right now.

Now 23 years old, Mazie has just released her very first original song, Real Man. Real Man is a song for classic and modern country music fans alike. Mazie’s clear, strong voice croons the longing, lovesick ballad in a voice reminiscent of Patsy Kline or Reba McIntyre, but her tone is unique and new age for the 21st century listener. Mazie says of the piece, “The melody is strong, just as strong as the emotions behind it. It’s one of my favorite songs to perform, and I hope that’s something the listeners can feel.”

Mazie’s co-writer Len Snow, who wrote Real Man with her and has been writing and releasing songs of his own in Nashville for over 30 years, said of the artist, “When I first saw her, I said YES! When I first heard her, I said WOW! Mazie has an unlimited ceiling, and she can go as far as she decides she wants to go in the music industry. Country, pop, adult contemporary, blues, you name it. She can make it happen in any category.”

Dave Fowler, co-producer, director and bassist in the Real Man music video, says of the song and artist, “When I was first introduced to Mazie Rose, I was impressed by her captivating smile and personality. Lying underneath all that was an amazing talent of the likes I hadn’t seen in quite some time. As I got to know her a bit better, it became clear that there is really something special about this young woman. After working extensively in the studio with her, along with our partner Dolly Parton and producer Kent Wells, we all agreed: This young woman is a superstar in the making.”

When asked what’s next for her, Mazie shared that she plans to move to Nashville permanently later this year, where she will continue writing and recording original songs for her upcoming debut album.

We will be keeping an eye on Mazie as she continues her rise to fame and acclaim within the country music scene. As Mr. Fowler said, “Do yourself a favor and check out Mazie Rose!”

Mazie at Dark Horse Recording in Franklin, TNMazie stands in front of the records of others who record at Kent Wells Productions, including Dolly Parton

Mazie sings on the steps of Dark Horse Recording Studio in Franklin, TN