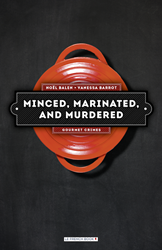 A delicious new mystery series in the works.

Perfectly simmered to give readers shivers and delighted tastebuds.

Mystery and thriller publisher Le French Book will be introducing a new culinary mystery series set in France offering a balanced blend of gastronomy and suspense. Author Noël Balen, who pens the Winemaker Detective series, has teamed up with Vanessa Barrot and created a new female sleuth and a new series with mouth-watering excursions into the French regions, where food is paramount and meals are accompanied by betrayal, revelations, and murder.

The main character, Laure Grenadier, is a food writer and restaurant critic with access to the closed world of France’s top kitchens. The series combines local reality and fiction, historical fact and culinary anecdotes, recipes and local products, resulting in authentic armchair travel to France for food lovers and mystery lovers alike.

The series
MINCED, MARINATED, AND MURDERED takes readers to the heart of France’s culinary capital, Lyon, where chefs are being murdered, endangering the city’s culinary tradition. Laure Grenadier, editor-in-chief of a Paris-based food magazine, heads to Lyon with her photographer Paco Alvarez to review the city’s traditional bistros, interview the town’s best chefs, and uncover the top local food producers. Everything changes when a restaurant owner is found dead. A wave of panic follows with the second murder, and the food writer sets out to find the truth.

The second title in the series—A NEARLY PERFECT CREAM—is set in Normandy where a bout of food poisoning—mon dieu—leads to several deaths. Local apple growers, cheese producers, Qatari horse farmers, and Calvados officials are all up in arms, while Laure and Paco investigate what really happened.

Recently published in France, the first two books in Gourmet Crimes are slated to come out in English in 2017. Praised for its dialogue and suspense, this series is "a recipe perfectly simmered to give readers shivers and delighted tastebuds."

Readers and reviewers can request an advance reader copy here.

The authors
Noël Balen, writer and musician, has thirty mysteries to his name, including the Winemaker Detective series, a hit book and TV series. His co-author and wife Vanessa Barrot is a corporate lawyer who comes from a family of Parisian restaurant owners.