Craigslist, the granddaddy of all classified advertising sites worldwide, has cracked $1 billion in revenue for the first time since its launch in 1995. 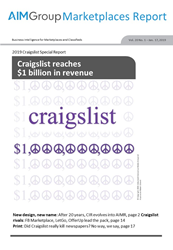 Craigslist, the granddaddy of all classified advertising sites worldwide, has cracked $1 billion in revenue for the first time since its launch in 1995.

An AIM Group analysis of advertising on the site, which charges for ads in just six categories, estimated 2018 revenue at $1.034 billion. Almost 70 percent of its revenue comes from recruitment advertising, with 16 percent from automotive ads and the remainder in services, for-sale, “gigs” and rental ads.

The AIM Group estimated profit margins at Craigslist, Inc. at “close to 90 percent.” The for-profit company, which is wholly owned by founder Craig Newmark and CEO Jim Buckmaster, employs about 50 people in its San Francisco office. It declined comment to the AIM Group about its revenue or any other aspects of its operation.

In a 19-page special report, the AIM Group details Craigslist’s income growth, despite steadily declining traffic, and the reasons revenue is going up while the number of users is falling. The report covers Craigslist pricing, market-by-market revenue figures, competitors in the United States and more.

“Craigslist is a bigger gold rush than the original 1848 California Gold Rush,” said AIM Group founding principal and executive editor Peter M. Zollman. “Even though it generates massive revenue and profits, it’s remarkable because its prices are incredibly low and it does very little to maximize its income.”

“Craigslist is the No. 1 classified advertising site in the world, both by revenue and by traffic,” said Zollman. “Although the collective worldwide Indeed.com sites generate more than $2 billion in annual revenue, it’s stunning that a single site can generate $1 billion in revenue, with more than 99 percent of that coming from the United States.”

The Craigslist report is the first edition of AIM Group Marketplaces Report, the successor to Classified Intelligence Report, which was published by the AIM Group for 20 years. The report is available at AIMGroup.com for $695 with a money-back guarantee. A free preview edition is available at the site.

Note to reporters / editors: Free copies of the report are available for coverage purposes by calling 1-407-788-2780 or emailing info@aimgroup.com. AIM Group founding principal Peter M. Zollman is available for interviews at peterz(at)aimgroup.com, 1-321-356-3182; marketing director Stacey Fink is at 1-917-446-4246, staceyf(at)aimgroup.com.