At its annual summer meeting August 11, 2020, the Cranberry Marketing Committee (CMC) announced new membership for the next two-year term along with the domestic production estimate for the upcoming harvest. 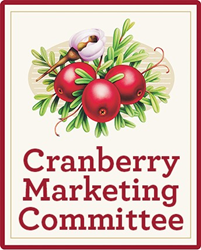 CMC is a federal marketing order that promotes the worldwide consumption of U.S. cranberries. Its membership includes 13 voting members and nine alternate members from the U.S. cranberry industry who represent growers in four designated districts from the Northeast, Mid-Atlantic, Central and Western regions of the United States. CMC membership also includes one public voting member and one alternate public member. CMC members are nominated to 2-year terms and submitted for official selection by the USDA Secretary.

CMC members have an important and direct influence over actions and activities of the Committee. This includes when and what volume control regulations should be implemented, and what generic promotional and marketing activities are initiated utilizing funds that are collected through handler assessments, federal grants and other sources.

In addition to welcoming the new slate of members listed below, the CMC formally recognized and thanked outgoing members at its recent annual summer meeting. These individuals have volunteered more than 100 years collectively in service to the U.S. cranberry industry: Lawrence C. Harju of Middleboro, MA who has served on the Committee since 2004; Joseph W. Darlington of Browns Mills, NJ who served since 1990; Martin Potter of Camp Douglas, WI who served since 1984; James Van Wychen of Warrens, WI who served since 2006; and Ronald Puhl of Port Orford, OR who served several terms since 2004.

Other Than Major Cooperative Members & Alternate:
Nicholas A. Puhl of Port Orford, OR; Martin “Ty” Vincent of Bandon, OR (Alternate)

About the Cranberry Marketing Committee (CMC)
The CMC was established as a Federal Marketing Order in 1962 to ensure a stable, orderly supply of good quality product. Authority for its actions are provided under Chapter IX, Title 7, Code of Federal Regulations, referred to as the Federal Cranberry Marketing Order, which is part of the Agricultural Marketing Agreement Act of 1937, as amended. This Act specifies cranberries as a commodity that may be covered, regulations that may be issued, guidelines for administering the programs, and privileges and limitations granted by Congress. For more information about the CMC, visit http://www.uscranberries.com or follow @uscranberries on Facebook, Twitter, Instagram and Pinterest.