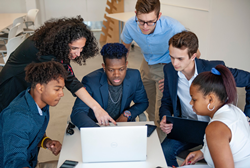 “We learn by doing and one of the hallmarks of studying at Florida Poly is being able to get your hands on stuff,” Davis said. “But being in this company since my freshman year has really given me a lot more than I could ever expect from a college education.”

A group of Florida Polytechnic University students has found work with a great company that offers hands-on experience, flexible hours, fun co-workers, and the kind of boss most people only dream of – themselves.

Madd Technologies LLC, which stemmed from an idea friends had late one night, is a technology start-up helmed by Florida Poly students and focused on the consumer electronics and computer software markets. It provides services such as product design, website design, computer-aided design, app development, and more.

“We had this crazy idea to start a company,” said CEO Djuan Gayle, a senior majoring in computer engineering. “We’re going to a technology school and we want to change the world, so why not be able to put all of that under a company and just make it happen.”

That crazy idea and the company’s willingness to take on unusual projects are reflected in its name.

Recent Madd Technologies projects have included the design of a university app, and the design of a smart refractometer to measure grapes for peak ripeness for a client in the wine industry.

In addition to providing technology services for local businesses, Madd Technologies is working on developing its own products, such as an algorithm that uses artificial intelligence to recommend clothing to customers.

“When you’re an engineer, everyone in the industry is looking for experience and as a student it can be difficult to gain that experience,” said Jaimie Davis, a junior electrical engineering major and the company’s technology officer. “Being a part of this company and working on project management skills and overall communication really helps all of us become better engineers.”

“It’s been a learning curve because it’s not like we’re going to business school, and Justin has been really good at helping with that,” Gayle said. “We go to him and he just finds the time.”

Gayle said the company is hoping to soon grow to about 15 team members and move into an office space in Lakeland and hopes to eventually be located near the University, providing both jobs and internships to other Florida Poly students.

“For the whole four years of college, we’ve been entrepreneurial-minded,” said Logan Carlson, a senior majoring in computer engineering and the company’s research and development officer.

Madd Technologies’ leadership said they hope other students will see their success and be motivated to follow their own “crazy ideas.”

“We learn by doing and one of the hallmarks of studying at Florida Poly is being able to get your hands on stuff,” Davis said. “But being in this company since my freshman year has really given me a lot more than I could ever expect from a college education.”

Students who would like to join Madd Technologies and businesses interested in the company’s services can email maddtechnologies1@outlook.com.