Pickleball Media Launches “I Used to Be Somebody” Podcast 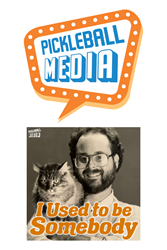 The "I Used to Be Somebody" podcast! Produced by Pickleball Media

"I Used to Be Somebody isn't your typical 'Life After Retirement' advice... our podcast is all about building a meaningful second act."

I Used to Be Somebody, a new weekly podcast for the “un-retired”, launched in mid-September. Host Carl Landau interviews entrepreneurs, executives, and creatives about how they built a successful (un)retirement. Episodes 1-4 include insights from:

Produced by Pickleball Media, I Used to Be Somebody is for Boomers charting their “second act” rather than a traditional retirement. "This podcast isn’t your typical "Life After Retirement” advice," says host Carl Landau. "Instead, we feature stories from first-time entrepreneurs launching their first company in their 60s and former executives reconnecting with their passion after a high-powered career. And it’s FUN (after all, this is the first podcast ever produced from a Tiki Bar!)"

Retirement in 2020 looks totally different than it did for previous generations:

Why the Pickleball name? When not podcasting, Landau loves playing pickleball, the fastest growing sport in the U.S.A. Introductory video: https://bit.ly/3gV8ogp

Carl Landau is Pickleball Media’s Creative Genius and host of I Used to be Somebody. He started his first magazine at age 26 and launched 4 successful media companies. (Carl also had 15 minutes of fame in the 1980s with his “Buy An Ad, Get a Cat” ad.)