A recent report on 2015 fraud losses by banks and merchants on all credit, debit, and prepaid payment cards issued worldwide. 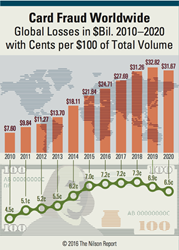 The industry's best defense against counterfeit fraud are EMV cards.

Fraud losses incurred by banks and merchants on all credit, debit, and prepaid general purpose and private label payment cards issued worldwide reached $21.84 billion last year when global card volume (purchases of goods and services combined with cash advances and withdrawals) totaled $31.310 trillion. This means that for every $100 in volume, 6.97¢ was fraudulent, up from 6.21¢ per $100 in 2014. Fraud, which grew by 20.6%, outpaced volume, which grew by 7.3%, according to The Nilson Report, the top trade newsletter covering the card and mobile payment industries.

Fraud losses occur from counterfeit cards at the point of sale and automated teller machines (ATMs), card-not-present (CNP) transactions (made online or via mail, telephone, a social network, or mobile app), fraudulent applications, lost and stolen cards, and other smaller categories.

Losses to card issuers reached $15.72 billion or 72% of gross fraud losses worldwide. Merchants and acquirers lost the remaining $6.12 billion or 28% of the total. Issuers absorbed the majority of fraud losses last year. Issuer losses occur mainly from counterfeit credit and debit cards used at the point of sale and ATMs.

“The industry’s best defense against counterfeit fraud are EMV cards and the terminals needed to read their chips,” said David Robertson, Publisher of The Nilson Report. “EMV has been steadily penetrating dozens of countries, but in the U.S. where issuers poured EMV cards into the market, merchants lagged in deploying terminals.” By year-end 2015, EMV-compliant cards handled nearly 36% of Visa, Mastercard, UnionPay, Discover/Diners, JCB, and American Express card transactions worldwide. In the U.S., compliant transactions accounted for less than 2% of the total.

Fraud losses to merchants and their acquirers occurred overwhelmingly from CNP transactions, and the problem is aggressively worsening. Losses to CNP fraud exceeded $5.65 billion last year, with growth in nearly every country. In the U.S., CNP already accounts for more than 50% of total fraud losses.

By 2020, card fraud worldwide is expected to total $31.67 billion. Even though fraud has worsened every year this decade, it is still lower than the peak years of the 1970s when measured as basis points of total volume.

About The Nilson Report
The Nilson Report, in its 46th year of publication, is the most respected source of news and analysis of the global card and mobile payment industries. The by-subscription-only newsletter provides credit, debit, and prepaid card issuer, acquirer, and vendor statistics not found in any other trade journal, as well as concise technology, personnel, and product news and updates. It does not accept paid advertising of any kind. There are no advertisements, no articles written by vendors, and no sponsored content.