Crime Drops in City of Rancho Cordova, CA by 61%

Today, the City of Rancho Cordova, CA celebrated being a safe community by announcing that violent crime and property crime decreased by 61% between 2004-2019, which reflects data collected since cityhood. 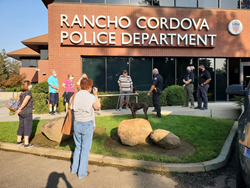 Since Rancho Cordova incorporated and established the Rancho Cordova Police Department (RCPD) 18 years ago, it has focused on making the community a safe and inviting place for everyone.

Today, the City of Rancho Cordova once again celebrates being a safe community by announcing that violent crime and property crime decreased by 61% between 2004-2019, which reflects data collected since cityhood.

Since the city incorporated and established the Rancho Cordova Police Department (RCPD) 18 years ago, it has focused on making the community a safe and inviting place for everyone.

“We are proud to announce this significant crime decrease in the City of Rancho Cordova,” said City Manager Cyrus Abhar. “We attribute this reduction to our four-pronged policing approach, combined with a culture of innovation, and a hand-picked dedicated policing team.”

The city’s four-pronged policing approach focuses on building relationships with residents and businesses, getting to know the needs of neighborhoods, preventing criminal activity, and using data to help focus resources. The city has created new and innovative programs, units and initiatives to support this approach.

Three examples include the Crime Suppression Unit, and the city’s focus on Intelligence-led Policing and Community-Oriented Policing.

The Crime Suppression Unit is the first highly visible and proactive policing unit of its kind in the region that focuses on enforcement in Rancho Cordova to continue to improve quality of life for residents and businesses.

Created in 2015, thanks to a grant from the city’s Community Enhancement Fund, the team made over 1,300 arrests and contacted nearly 3,500 probationers during the first five years of the program. The team also takes firearms and narcotics off the street, mitigates crimes before they occur, and deters those who would commit crimes in the city.

“I helped create the Crime Suppression Unit, which was our first special unit, when I was first at RCPD as the Assistant Chief of Police,” said Chief of Police Kate Adams. “At the time, we were the only police department locally that was taking such a proactive policing approach. Now five years later, we’ve used this framework to create other special units with different goals.”

One focus in the city’s four-pronged policing approach is Intelligence-led Policing, a strategy of consistently reviewing data to help the city focus resources, as well as identify and solve crimes.

For example, catalytic converter thefts are a top crime throughout the nation, and RCPD started to see these thefts increase in the city in 2018. RCPD created a program combining data collection with crime prevention to address the increase in catalytic converter thefts. RCPD continues to monitor trends and adjust the program as needed to ensure its response remains effective.

“Technology and data are powerful tools that we’ve used to enhance our proactive policing approach,” said Chief Adams. “We are able to use these tools to identify crime trends and hot spots for our special units, assist detectives with investigations, and provide guidance to patrol.”

Another focus in the city’s four-pronged policing approach is Community-Oriented Policing, a strategy to build relationships with residents and businesses to identify public safety needs and work together to address them.

In addition, RCPD created a Youth Services Unit to further strengthen relationships with Rancho Cordova schools and with youth in our community.

“RCPD’s innovative programs, units and initiatives are strengthened by our dedicated and motivated team,” said Chief Adams. “They are hand-picked to come here because of their skill and passion for the community. We feel the difference with our internal culture, and our community also tells us what a difference it makes in building relationships.”

Visit http://www.CityofRanchoCordova.org or http://www.RanchoCordovaPD.com for more information about the city’s proactive and innovative policing approach.