On March 26, 2019, the Criminal Defense Bar Association (CDBA) of San Diego, California, awarded the prestigious Trial Lawyer of the Year for 2019 to Daniel F. Greene of the Law Offices of Kerry L. Armstrong, APLC. A monumental achievement for Greene, this now makes the San Diego Defense Attorneys team the only criminal defense legal firm in San Diego with two winners. Kerry L. Armstrong previously won the award in 2013. 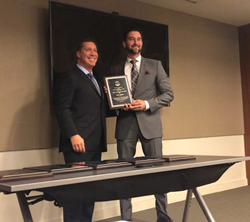 Dan Greene, a senior associate, has an impressive winning record of work in the criminal defense industry in San Diego, receiving numerous awards during his time with the Law Offices of Kerry L. Armstrong, APLC. Here is a list of his most recent accolades:

Advocate for Those Who Need a Voice

Greene believes in helping those people who do not have a voice in the legal system. A charismatic defender for the people, Greene is not afraid to take on even those cases which may appear unlikely to win in its initial viewing, yet the defendant in Greene’s mind is innocent of the charges placed against that defendant.
Greene can do no less than to jump into the case with both feet and give it the best fight for his client that he can develop, to win that case. Greene uses his skills to expertly develop the story, working to convince both the judges and the juries of the client’s innocence.

Greene handles many criminal defense cases not only in San Diego, but also in San Bernardino, Los Angeles, and in Imperial and Orange Counties. His expertise in successfully defending his clients range in cases of suspected murder, attempted murder, assault with a deadly weapon, gang-related crimes, transportation of narcotics, aiding and abetting, grand theft and embezzlement, and sexual assault crimes.

Greene also handles cases in juvenile delinquency and dependency, probation modifications, early termination of probation and exclusions, misdemeanor and felony expungement, and exemptions related to the Department of Justice Sex Offender Website. You can find a list of his extensive areas of practice at the bottom of the legal firm’s web page here.