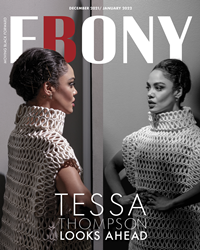 For this special edition, EBONY spotlights Thompson with a stunning photo spread accompanied by her candid cover story centering around her career and penchant for taking on challenging roles, fame, representation and Black women in Hollywood and the recent release of her new film Passing.

EBONY, the iconic brand serving as the leading voice of the Black American experience committed to “Moving Black Forward,” today unveiled its end-of-year December/January digital cover experience with acclaimed film, television, and theatre actress Tessa Thompson gracing its cover. For this special edition, EBONY spotlights Thompson with a stunning photo spread accompanied by her candid cover story interview centering around her career and penchant for taking on challenging roles, fame, representation and Black women in Hollywood and the recent release of her new film Passing.

Based on Nella Larsen’s classic 1929 novel, the Netflix film adaption of Passing follows two mixed-raced Black women — Irene Redfield and Clare Kendry, played by Thompson and Ruth Negga — who can “pass” as white but choose to live on opposite sides of the color lines in 1920s Harlem. The film intimately uses the notion of “passing” to explore not just racial identity but gender, sexuality and the performance of femininity.

Inspired by the movie, which was filmed in black and white, the dramatic visuals shot by EBONY Photo Director and Visuals Lead Keith Major are a nod to old Hollywood while also blurring the line between masculine and feminine. As a bold and refreshing statement and looking ahead to the new year, Thompson rocks Spring 2022 looks by some of today’s most exciting young designers including Christian Siriano, Cong Tri and HARBISON— all of whom are considered to be the leaders of the next generation of visionaries redefining the rules of fashion.

For her EBONY cover story - written by Pulitzer Prize–winning journalist, author, and CBS News correspondent Wesley Lowery - Thompson talks light-skinned privilege in Hollywood, the legacy she hopes to leave and how she is making room for more Black women to have their stories told. Specifically, with her new production company, Viva Maude in partnership with HBO and HBO Max, Thompson is determined to upend the system by telling more Black stories and creating more diverse and nuanced lead movie roles for Black actresses.

In addition to the cover, the December/January edition also includes an exclusive Interview with Thompson’s long-time stylists and powerhouse styling duo Wayman + Micah, who discuss their inspiration for the shoot and the importance of amplifying Black designers through their work.

“With this cover experience being the last one of the year, we knew we had to make this one especially impactful and to really reinforce EBONY’S continued role as a voice for the culture. As we continue to forge ahead into a new year having made it through two challenging years that have highlighted the racial disparity and inequities that are prevalent throughout this country, we wanted to highlight someone who is acting as a voice of change in their respective area,” said Marielle Bobo, Editor-in-Chief and Senior Vice President of Programming, EBONY. “Tessa Thompson is such an amazing talent and certainly continues to push boundaries and evolve in her craft – which we see currently with her incredible work in Passing. She is also doing the work to make change in her industry. She was the perfect person to end our editorial year with as she personifies what the EBONY brand represents – excellence, creativity and boldness.”

On identity and the way it’s perceived:
“In a perfect world, we should be allowed to create, with real freedom and with flexibility, who we want to be.”

On her discomfort with living life in the spotlight:
“I’m still working through and navigating discomfort with being a public entity. There is this idea that if you’re a performer, you’re comfortable with or interested [in] being watched. For me, that’s not necessarily the case. My work has sometimes meant that I’ve had to pass as more of an extrovert than I am. That was one of the joys about playing Irene [in ‘Passing’] as well, to lean into the part of me that is introverted, to minimize the part of me that is an extrovert.”

On light-skinned privilege in Hollywood:
“I’ve been able to play a lot of very different characters I’m not sure women who came before me—who I stand on the shoulders of—would have been able to. I’ve had the opportunity to really understand and unpack my own measure of privilege inside of the industry, and as someone who hopes to be a changemaker, [I’ve asked myself,] How do I contend with that? What do I do?”

ABOUT EBONY
EBONY continues to be the leading authority for all facets of Black life - staying rooted as an anchor of Black culture. Under new ownership and leadership, the rebirth of EBONY signals the evolution of the beloved publication as a 21st century digital media brand with a focus on illuminating the Black perspective and being the curator of the Black experience – past, present and future.

EBONY Media Group is a division of 1145 Holdings LLC.