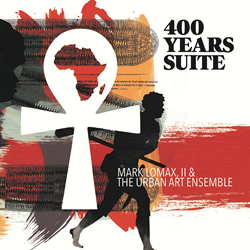 “Music is a language that transcends social and societal buriers, and connects with people of all ages and ethnic backgrounds,” Dr. Lomax

Critically acclaimed composer, recording artist, drummer, activist and educator Dr. Mark Lomax, II today lunched a 62 min Suite of his life’s work – 400: An Afrikan Epic. The musical suite, an abbreviated version of the original 8.5-hour musical journey over 12 albums, is released in coordination with and in celebration of the International Day of Peace and Dr. Martin Luther King’s legacy.

Dr. Lomax recently embarked on an international tour to share his storytelling through music with students at colleges and universities as well as communities across the country and around the world, engaging people in a dialogue that creates a fresh perspective and understanding of their history. Lomax uses music as a catalyst to open a crucial conversation that addresses the most relevant issues surrounding race, class, and gender today.

“Music is a language that transcends social and societal buriers, and connects with people of all ages and ethnic backgrounds,” Dr. Lomax said. “I am excited to share with people around the world, a Suite of music that connects people to their history in order to create a better world for future generations.

“This music is about understanding, connecting and healing. By helping people engaging with that past, they can better understand the present, and commit to moving forward together as one Human family.”

Originally released as a 12-album cycle, with more than 8.5 hours of music, the 400 Suite shares a condensed series of themes told through the musical vision of Dr. Lomax. The listener is transported through chronological abstractions of the Afrikan experience: past, present, and future beginning with pre-colonial Afrika, through the 400 years of the Ma’afa (“Black Holocaust” 1619-2019) and concludes with an optimistic glimpse into what the future can hold for the Afrikan diaspora.

The intent of the music and the message Dr. Lomax shares through both his music and the engagement of communities in conversation is the strength, resilience, struggle, and triumph of people and cultures around the world through an African-centric lens. He teaches unity and inclusivity in one human race through collective individualism, compassion, understanding and change.

"Participating in 'The 400' project has truly been a life changing experience,” said Dr. William Menefield, Jazz Pianist, Mark Lomax Quartet. “The music Dr. Lomax masterfully composed evokes emotional and spiritual responses in all those who touch, hear and experience it. 'The 400' simultaneously pays homage to our ancestors, aids in the healing of our society's present state of human relations and looks towards a brighter future. The newly release Suite opens the door for a broader audience to engage in the art, the stories and the experience."

“The music and the performance are near spiritual,” Tiffany Cooper, Community Engagement and Diversity Manager, Cincinnati Symphony Orchestra. “Dr. Lomax has an indescribable way through the performance of the 400 Years Suite of effortlessly connecting jazz and classical with the rhythms of our ancestors. The quartet is an inspirational vessel in sharing your gift with the world.”

On January 20, 2020, Dr. Lomax will host a special presentation of the 400 Suite at Symphony Hall in Cleveland Ohio in coordination with the Cleveland Orchestra. Following the performance, he will also hold a Master Class and panel discussion at Case Western Reserve University. For more information on Dr. Mark Lomax, II or upcoming performances of 400: An Afrikan Epic, please visit http://www.marklomaxii.com

About Dr. Mark Lomax, II
Critically acclaimed composer, recording artist, drummer, activist, and educator Dr. Mark Lomax, II, earned his Bachelor’s, Master’s, and Doctor of Music Arts degrees from The Ohio State University. He’s also received numerous accolades for his work as a composer and performer, including the coveted Wexner Center for the Arts Artist Residency Award in 2018. Using music and engaging conversation as a vehicle, Lomax inspires audiences to think critically about realizing the potential of our collective humanity to change the world.