Multi-disciplinary curriculum developed to build on the musical stories of his composition 400: An Afrikan Epic, provokes critical thinking and shares wholistic perspective of Afrikan roots and culture 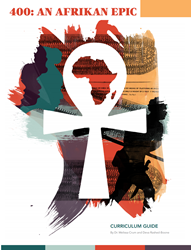 "Because of the historical nature of the musical work, there is a natural educational element that goes hand in hand," Dr. Mark Lomax II

Critically acclaimed composer, recording artist, drummer, activist and educator Dr. Mark Lomax, II is releasing a new educational resource that enhances the understanding of Afrikan history and takes a wholistic look at the triumphs and falls of the Afrikan people from pre-colonial Afrika to Afro-Futurism. This multi-disciplinary curriculum was developed as a visual tool to bring forward the stories told through his groundbreaking musical composition and life’s work, 400: An Afrikan Epic, in text and storytelling form.

Originally released in 2019 as a 12-album cycle with more than 8.5 hours of music, 400: An Afrikan Epic transports listeners through chronological abstractions of the Afrikan experience through past, present and future, powered by the soul-moving sounds of drums, strings, woodwinds and piano.

“My first extended composition, Tales of the Black Experience, was a direct result of my academic research. I saw the direct connection between what I was learning and the stories I wanted to tell as a composer and a musician,” Dr. Lomax said. “Because of the historical nature of the musical work, there is a natural educational element that goes hand in hand and, in creating 400: An Afrikan Epic, the curriculum became critical as a companion piece to understanding everything that is in and around the music.”

To intertwine the curriculum and album, Dr. Lomax partnered with co-authors Dr. Melissa Crum, a diversity and equity practitioner in Columbus and the founder of Mosaic Education Network, and Deva Rashed-Boone, a Columbus-based writer and educator.

The curriculum materials follow the album’s three-part categorization and drawsthe readers into the culture and progression of the people from (1) Alkebulan: The Beginning of Us, a history of pre-colonial Afrika; (2) the Ma’afa (“Black Holocaust”): Great Tragedy, the trauma of Afrikan people’s nadir experience in the diaspora; and (3) Afro-Futurism: The Return to Uhuru, conceptualizing a forthcoming Afrikan experience beyond the present.

“Traditional approaches to Afrikan and Afrikan-American history are often taught from a deficit perspective, whereas these works celebrate the resilience, brilliance, strength, genius and creativity of a people who continue to endure while offering an inspired view of the future,” Dr. Crum said. “This curriculum encourages educators to see this as a direct connection to American history and not just Black history and thus have the opportunity to humanize people who have not always had an adequate systemic platform to share their humanity in an authentic way.”

The 90-page full color print and digital curriculum guide contains historical overviews, definitions, discussion questions, and over 100 scholarly references that encourages high school and college learners to think critically about Afrikan history through an alternative lens in completing both independent research projects and lesson plans developed by educators. The curriculum is published by Mosaic Education Press in partnership with CFG Multimedia. Layout and design is by Marshall Shorts. Both digital and hard copies of the curriculum are available at Mosaic Education Press, and Amazon Kindle starting May 4.

Dr. Lomax uses music as a catalyst to open a crucial conversation that addresses the most relevant issues surrounding race, class and gender today. He believes that by helping people engage with that past, they can better understand the present and commit to moving forward together as one Human family.

About Dr. Mark Lomax, II
Critically acclaimed composer, recording artist, drummer, activist and educator Dr. Mark Lomax, II, earned his Bachelor’s, Master’s and Doctor of Music Arts degrees from The Ohio State University. He’s also received numerous accolades for his work as a composer and performer, including the coveted Wexner Center for the Arts Artist Residency Award in 2018. Using music and engaging conversation as a vehicle, Lomax inspires audiences to think critically about realizing the potential of our collective humanity to change the world.

About Dr. Melissa Crum
Dr. Melissa Crum is an artist, author, researcher and founder of Mosaic Education Network, LLC. She leads a consulting company that infuses the arts, research, storytelling and critical thinking into professional development, community building and curriculum development. Dr. Crum works with her team of experts to act as engaging and collaborative resources to schools, nonprofits and companies, helping them gauge the collective impact of our unconscious bias to reach diversity, equity and inclusion (DEI) goals.