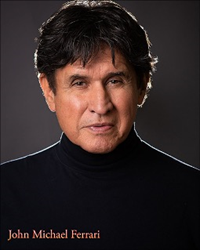 "A fun-loving, storytelling Nam Vet from Hollywood, CA, John Michael Ferrari pours out a whiskey-hued glass of Pop, Country, Gospel, Blues and Jazz in his music." Indie Music Plus

Several tunes off Ferrari's recent album "Be the Smile on Your Face" are climbing radio charts. His songs weave together struggles and joys of love and other life experiences of his and others. Ferrari writes emotional story-telling cross-genre songs with touches of sophistication and child-like wonder. Country-Pop, Country-Jazz, Country-Blues, Country-Inspiration.

"Be the Smile on Your Face" album of 12 tracks was produced by Pepper Jay for the indie label, Cappy Records, recorded at Larry Beaird Studios, Nashville, and is promoted to radio by Loggins Promotion.

Recently, Ferrari was awarded Singer Songwriter of the Year 2019 (Producers Choice Honors), Peace Song of the Year 2020 for his song "Like a Rock and Roll Band" (Hollywood Tribute to the Oscars, Art 4 Peace), Rising Star (eZWay Golden Gala 2020,) and Triple A Album of the Year 2020. Awards are appreciated but per Ferrari there's no place he'd rather be than on stage because "There's never a stranger in the audience."

John Michael Ferrari is also a teacher of performance skills, the author of "Acting with Your Eyes", and co-author of "Dynamic Song Performance, The Singers Bible".

Be the Smile on Your Face EPAvailable on Amazon

Be the Smile on Your Face T-ShirtsModel Christie Philips