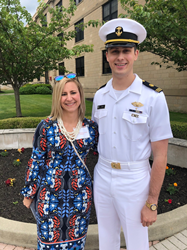 Crowley's Devon Pound and Benjamin Starr (right) are pictured before the presentation of the 2019 Crowley Maritime Security Enhancement Award.

I have always been impressed at Crowley's support and presence for the fledgling maritime officers at Kings Point, and I am very grateful and humbled to have been considered for and bestowed upon this award.

Starr, a native of Phoenix, Ariz., will graduate later this year with a degree in maritime logistics and security. During his freshman year, Starr became involved with the USMMA Emergency Services Rescue Squad after receiving his New York State EMT-B license. He was also vice chairman of the USMMA Campus Activities Board and worked directly with the Commandant’s Office to help establish the first student café on campus. For his sea time, Starr served aboard MSC’s USNS Walter S. Diehl and the Matson-owned MV Manulani. Upon graduation, he plans to sail commercially as a third mate and is seeking a commission in the U.S. Navy Reserve as a Strategic Sealift Officer.

“I have always been impressed at Crowley's support and presence for the fledgling maritime officers at Kings Point, and I am very grateful and humbled to have been considered for and bestowed upon this award,” said Starr. “It is truly an honor.”

Helping to develop the next generation of U.S. merchant mariners is of vital importance to Crowley, the maritime industry and the nation at large. The merchant marine primarily transports cargo and passengers during peacetime. In times of war, the merchant marine can be an auxiliary to the U.S. Navy, and can be called upon to deliver military personnel and materiel for the Department of Defense.

USMMA was dedicated in 1943 by President Franklin D. Roosevelt to train U.S. citizens for service as officers in the U.S. merchant fleet. Operated by the Maritime Administration of the U.S. Department of Transportation, the academy has produced more than 20,000 graduates who serve the nation in the maritime industry, both at sea and ashore, and in the armed forces.

Crowley has provided more than $3 million dollars in scholarship funding for more than 1,000 students since 1984. The company has also donated more than $2 million over the years to support other educational programs. In 1994, Chairman and CEO Tom Crowley Jr., established the Thomas B. Crowley Sr. Memorial Scholarship Program in honor of his father, who led the company to extraordinary heights before passing away in 1994. The company continues to give scholarship dollars to deserving students in the U.S., Alaska and Puerto Rico. In 2006, the program was expanded to Central America and to date, has provided financial assistance to dozens of students in that region.

To learn more about the Thomas B. Crowley Sr. Memorial Scholarship program, visit us here http://www.crowley.com/scholarships.