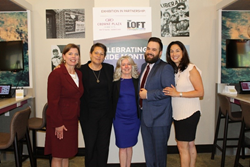 Crowne Plaza White Plains, in conjunction with The LOFT LGBTQ Community Center, presented a unique photo exhibit to celebrate Pride Month and give a nod to Stonewall’s 50th milestone anniversary. Stonewall is considered the birth of the modern LGBTQ movement; during the 1969 Stonewall Riots, 500 people held a “Gay Power” demonstration in Washington Square Park, followed by a candlelight vigil in Sheridan Square in Manhattan.

The exhibit in the Crowne Plaza lobby featured photographs commemorating LGBTQ Pride with historic images from the Stonewall event and photos of various Westchester/New York Pride demonstrations and achievements throughout the years. Hotel guests and the general public were able to view the gallery through June 30 and attend Pride-themed Happy Hour at the hotel’s Mix Cocktail Bar & Kitchen every day through the month’s end. A “World Pride Month 2019 Package,” which included a buffet breakfast for two and two roundtrip Metro-North Train tickets to Grand Central Station, was also available during the month.

On Thursday, June 27, the Crowne Plaza and The LOFT hosted an event to highlight their collaborative efforts. Of note, the Office of County Executive George Latimer provided both organizations with proclamations to recognize their successful partnership and support of the LGBTQ community. Natasha Caputo, director, Westchester County Tourism and Film; Barry Surman, deputy director, Westchester County Tourism and Film; and Linda Tyler, associate director of member engagement, Business Council of Westchester, were among the other dignitaries present.

“It was a thrill to partner with The LOFT LGBTQ Community Center for Pride Month, and we look forward to a continued association,” said Monika Henry, general manager, Crowne Plaza White Plains. “The LOFT is and has been a wonderful resource to the LGBTQ community, and the Crowne Plaza is here to support in any way we can.”

“Everything came together seamlessly for this effort,” added Judy Troilo, executive director, The LOFT LGBTQ Community Center. “It’s great to have an ally in the Crowne Plaza White Plains. The exhibit tells a powerful story of a movement that eventually transformed the nation.”

Alex Armando Torres stopped by the Pride Month gallery during his hotel visit.