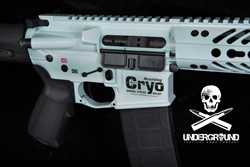 Thanks to the operational climate created by our leaders in federal government, there was unprecedented demand for our technology. 300 Below set a new record in 2013 after treating nearly 60,000 gun barrels at our flagship Decatur, Illinois facility.

Cryogenics, commonly confused with cryonics, is the study of low temperatures applied to material objects that has researchers and competition shooters working together to find better ways to stay on target.

Two American firms focused on precision enhancement of firearms will align in partnership next month to showcase the performance of their own unique technology portfolios. 300 Below, the worldwide leader in deep cryogenic processing of firearms, has aided long range competition shooters in setting 13 world records using its green environmentally-friendly cryogenic tempering technology, known as Cryo-Accurizing in the industry. 300 Below's President, Peter Paulin, originated the patent for the ultra-low-temperature treatment of firearms.

In April 2014, 300 Below's Cryo Barrel Stress Relief process will be applied with two competition-quality firearms supplied by Underground Tactical Arms (UTA), based on an AR-15 platform. UTA rifles are offered in every popular caliber, including 5.56, 300 blackout, 6.5 Grendel, 7.62x39, and .458 SOCOM. UTA manufacturers all of its rifle components, including suppressors but excluding gun barrels, using precision CNC equipment. All UTA components are assembled into a package that is revered by the Texas law enforcement community, and has a rapidly growing fan base in America.

Says Pete Paulin, President and C.E.O. of 300 Below, “Our partnership with Underground Tactical Arms underscores the continuity and strength of a fantastic year in passing for the firearms community. Thanks to the operational climate created by our leaders in federal government, there was unprecedented demand for our technology. 300 Below set a new record in 2013 after treating nearly 60,000 gun barrels at our flagship Decatur, Illinois facility.”

TheTruthAboutGuns.com was selected to evaluate each rifle both before and after 300 Below's cryogenic process using two expert shooters affiliated with their site. Their readership of 2.1 million monthly visitors has given them the largest readership in the world for the topic of firearms. One of the shooters selected for this review will be Nick Leghorn, TTAG's Testing and Evaluation Editor, based in San Antonio, Texas. Nick has prior analyst experience with the U.S. Department of Homeland Security and is a competition shooter (USPSA, 3-gun and NRA High Power) and EMT-B in his free time. The other shooter will remain undisclosed until publication of the review on TTAG's site.

TTAG's unbiased approach to reviews is intended to validate 300 Below's position in the market, which is that its cryogenic process directly contributes to significant accuracy increases for firearms, as well significantly increasing the service life of gun barrels.

300 Below's cost effective “green” process saves valuable resources for our environment by using liquid nitrogen (LN2), which returns to the air we breathe following the conclusion of tempering. 300 Below's cryogenic tempering is also beneficial for aircraft, automotive and a myriad of other tooling and steel components. The standard value proposition is 300% longer life for only 20% of the component's cost.

300 Below / CryoTech is the world's largest and oldest commercial cryogenic processing company, in business since 1966. Through a liquid nitrogen based process, molecular structures of steel components are rearranged to last 200-300% longer for around 20% cost of the component. 300 Below's cryogenic treatment acts an extension of the heat treatment process used in manufacturing defense and aerospace components, high-performance motorsports applications, 262,000+ gun barrels, sporting goods, musical instruments. 300 Below has started 156 operations in 36 countries around the world with its technology. Customers include NASA, all branches of the U.S. Military and their contractors.