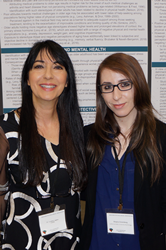 Dr. Lagana and Shayna Greenberg presenting their research at the 2019 WPA convention

I hope to raise awareness among the public and within professional settings, encourage greater sensitivity to the unique experiences of minority individuals in consideration of their intersectional identities, as well as inspire future research that will benefit these communities. (Shayna Greenberg)

At the 100th annual convention of the Western Psychological Association, California State University Northridge (CSUN) Professor Dr. Luciana Lagana presented five research posters with some of her research collaborators. The 2020 virtual conference was held on October 28-31, 2020.

One of the five posters is the experimental thesis of one of the co-authors mentioned below. It covered a film-based randomized controlled trial. This experiment was designed to test whether viewing an original anti-discrimination documentary featuring older sexual and gender minority adults experiencing homelessness could improve empathy, ageism, and homophobia. The other four posters covered literature reviews designed to: 1) establish a preliminary model of risk and protective factors impacting the well-being of older adults with sexual, gender, and racial/ethnic minority identities; 2) identify predictors of physical pain in older adults living with chronic pain; 3) delineate physical and psychosocial challenges faced by individuals living with a physical disability; and 4) highlight prominent advancements and gaps in the existing research literature on interventions aimed at improving empathy and attitudes towards homeless populations.

Shayna Greenberg is the lab supervisor and lead research assistant of Dr. Lagana; she is the primary author of the randomized controlled trial poster and a co-author of the remaining four posters. She recently received her Master’s degree from the CSUN Clinical Psychology program, graduating with highest honors. She was additionally conferred the Robert Rainey Award by the CSUN Clinical Psychology department, representing the highest levels of academic, research, and clinical skills. She is currently a first-year Ph.D. student in the Loma Linda Clinical Psychology Program. Her research focuses on a) reducing barriers and increasing access to mental health services for diverse populations, including gender and sexual minority youth, as well as b) designing and disseminating innovative mental health protocols in digital and community settings. With regards to the 100th Western Psychological Association convention, Shayna was dedicated to the coordination, development, and submission of each research poster. She excelled at ensuring that key findings regarding present advancements and gaps in the literature on present attitudes, risk and protective factors, as well as interventions to improve quality of life among the target populations would be properly highlighted, in order to benefit interested researchers for future study.

“I am grateful to have had the opportunity to work with Dr. Lagana and my fellow research collaborators to explore the breadth of circumstances contributing to the physical health, mental health, and general well-being of minority populations as well as potential interventions to improve such conditions. Identifying and better understanding individual and societally perpetuated factors in unity with their clinical consequences on vulnerable populations will serve as a foundational step in the advancement of interventions that may facilitate improvement in psychosocial functioning and overall quality of life. By consolidating and articulating key risk and protective factors experienced by often-stigmatized groups, in addition to presenting on preliminary experimental results of a film-based experiment to enhance attitudes towards older sexual and gender minority adults experiencing homelessness, I hope to raise awareness among the public and within professional settings, encourage greater sensitivity to the unique experiences of minority individuals in consideration of their intersectional identities, as well as inspire future research that will benefit these communities,” Greenberg concluded.

Dr. Luciana Lagana has multiple doctoral and post-doctoral degrees and specializations in experimental and clinical psychology. For over 20 years, she has been an established full-time CSUN professor of Psychology, Women's Health, Gerontology, and Sexuality. She enthusiastically teaches classes and mentors many undergraduate and graduate students from several CSUN departments. Moreover, since 2002, she has been conducting NIH-funded research on ethnically diverse, mainly low-income older women's physical, psychological, social, and sexual health. Dr. Lagana has accumulated 46 peer-reviewed publications and has delivered over 120 conference presentations. She won the 2017 CSUN Exceptional Creative Accomplishments Faculty Award for her anti-bias feature films and shows, as well as the 2011 Preeminent Scholarly Publications Faculty Award and the 2008 Visionary Community Service Learning Faculty Award. Concerning her artistic pursuits, she was a child performer (singing, dancing, acting, and modeling) and was part of a touring theatrical company in her late teens in Italy. She also studied acting, hosting, and filmmaking in Los Angeles where, after studying film production at CSUN in 2013 under the mentorship of Prof. Nate Thomas (the Director of the Film Production Option in the CSUN Department of Cinema and Television Arts), she started creating, directing, and producing several social impact films and series. She is an actor/host/screenwriter/director/producer with over 30 film festivals' wins listed on IMDb and more than 50 IMDb credits for hosting or acting in films, TV shows, and web series.