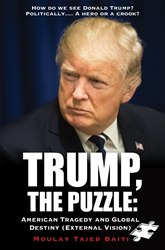 The book is not a political analysis in the common sense. It is an anthropological approach of the American situation which produced the Donald Trump phenomenon.

Analyst and commentator Moulay Taieb Baiti has a wake-up call for the American public in his book, Trump, the Puzzle: American Tragedy and Global Destiny ($14.99, paperback, 9781545639788; $7.99, e-book, 9781545639795). He urges them to snap out of their passing interest shown only during elections and take on the responsibility of equipping our politicians.

Baiti believes that average Americans are scorned by politicians who take advantage of them. He wants them to make politics more than an intellectual exercise or a hobby and take it seriously.

“The book is not a political analysis in the common sense. It is an anthropological approach of the American situation which produced the Donald Trump phenomenon,” said Baiti.

This book is the final conclusion of long experiences from 2005 in human sciences, anthropology and geopolitics, to give a special approach to American politics in view of the exterior, objective vision. Dr.Baiti is an Analyst commentator, writer - essayist in the Arab media on Arab and international affairs, in particular: relations:/Occident/Islam/and frequently invited to participate in Arab TV channels such as Al-Moustaqilla and Al-Mayadenn

Dr. Moulay Taieb Baiti is a former professor and lecturer at the Sorbonne, UNESCO, and the Universite Libre de Bruxelles.. He holds degrees in the areas of literature and Arab sectarian conflict, with additional studies psychology. He is a former advisor of the International Organization for Science, Culture, and Communication (UNESCO) in the fields of culture and education and received the 2014 “Arab Culture Armor Award” from the International Cultural Center of Australia.

Mill City Press is a division of Salem Media Group, with almost 12,000 titles published to date. Trump, the Puzzle is available online through millcitypress.net, amazon.com, and barnesandnoble.com.