“A Warrior Married to His Wife and PTSD” from Christian Faith Publishing author Curtis Butler III is a thought-provoking book that shares the author’s journey through the harrows of the battlefield and his endearing life with his family that exude with hope and support. 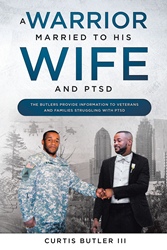 Butler III shares, “Life in Baghdad, Iraq, in October 2003 and again in 2006 was like living in a Crock-Pot. It was hot, and the breeze, if you can call it that, was just as hot. We would travel to strange destinations to attend meetings, drop off supplies, or pick up soldiers. We even performed guard duty and with the scorching temperatures. The protective gear that we wore added about twenty degrees and an extra thirty pounds. The temperature was approximately 140 degrees or better. I was told to put on some suntan lotion, and I thought the officer was making a joke because I did not know a black man could get a sunburn in the desert; this is to be true.

Published by Christian Faith Publishing, Curtis Butler III’s new book will surely fill the readers with inspiration and understanding for the sacrifices of their country’s soldiers for the security and peace of life and welfare.

Readers are invited to witness the powerful testimony of a soldier as he recounts his life in battle with the pains of war and the tragedies that define his life.

View the synopsis of “A Warrior Married to His Wife and PTSD” on YouTube.

Consumers can purchase “A Warrior Married to His Wife and PTSD” at traditional brick-and-mortar bookstores or online at Amazon.com, Apple iTunes store, or Barnes and Noble.

For additional information or inquiries about “A Warrior Married to His Wife and PTSD,” contact the Christian Faith Publishing media department at 866-554-0919.