Cybereason hosted the Consulate General of Israeli to New England and several staff members of the New England congressional delegation. The focus of the meeting was on election security and the impact Israeli founded companies are having on the New England economy. 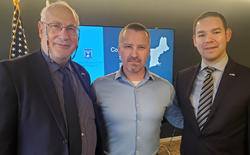 About SecureMA
SecureMA was launched by Cybereason in 2017 and convenes periodically to empower IT professionals with free information, resources and tools to defend against cyber threats. There is no program that currently exists like SecureMA where small businesses, non-profits, local law enforcement agencies and citizens can collaborate and share information on cyber threats.