Cybereason is Joined by Former Members of GCHQ, Foreign Office and Metro Police to Protect the UK General Election from Hackers

Cybereason together with the public and private sector organized an election hacking simulation in London titled Operation Blackout London looking to examine an anarchic group’s attempts to undermine institutions and systems of governance and the responsiveness of government. 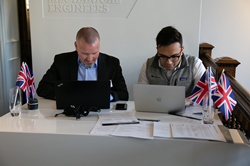 Cybereason's Israel Barak and Sanat Clugh ran the white team during Operation Blackout London. Here they are processing the data coming from both the Red and Blue teams during the exercise.

"Both teams performed well, and they deployed a number of tactics and techniques throughout the exercise. However, the Blue Team scored a clear victory because they were able to limit voting disruptions,” said Israel Barak, Cybereason's CISO, and Operation Blackout London White Team Leader.

Cybereason, creators of the leading Cyber Defense Platform, with former members of the British Government and the Metropolitan Police, came together on Wednesday December 11 at Operation Blackout London. The inaugural London event was a simulation of a hack in a fictitious UK city, Adversaria.

During the Operation Blackout simulation, Red and Blue teams faced off in a strategic duel. The Red team, led by Yossi Rachman, Cybereason’s head of security research, and other hackers, was determined to disrupt voting on election day in the made-up British city. The Blue team, tasked with defending the city, led by Alessandro Telami, a senior director at Cybereason, also included former members of GCHQ, the Foreign Office and the Metropolitan Police.

The goal of the table top exercise was to examine and advance the organisational responsiveness of government entities to an anarchic group’s attempts to undermine institutions and systems of governance. To date, most other election hacking discussions and exercises focus on the mechanics and minutiae of hacking election equipment or contaminating and violating the integrity of voter rolls.

"Both teams performed well, and they deployed a number of tactics and techniques throughout Operation Blackout London. However, in the end, the Red Team wasn't able to achieve its goals, and the Blue Team scored a clear victory because they were able to maintain its goals of limiting disruptions and maintaining normalcy and open and free elections. Overall, Blue communicated very effectively with public officials and publicly trusted channels to stop misinformation campaigns and greatly minimise disruptions,” said Israel Barak, Cybereason's Chief Information Security Officer, and Operation Blackout London White Team Leader.

"We understood from the start what the aim was from the Red Team trying to disrupt the natural flow of the elections and used all available means to carry this out. However, with many excellent former government and law enforcement experts on my team, we were able to counter Red's moves and maintain public trust," said Alessandro Telami, senior director at Cybereason. and Operation Blackout London Blue Team Leader, Cybereason.