VU Security, which specializes in digital identity, was the only Latin American company to participate of this first cohort to accelerate start-ups in the US Market 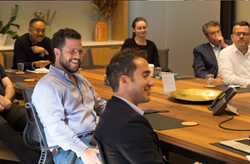 VU Security, a cybersecurity company focused on fraud prevention and identity protection, is among the start-ups featured as part of the first cohort of the JVP Play CyberNYC Program. The cohort was born out of the collaboration between leading enterprises, prominent founders and leaders, service providers and subject matters with JVP and the New York City Economic Development Corporation to support the buildout of the cybersecurity system in New York City.

VU was the only Argentine company in the first cohort, which specialize in a range of cyber disciplines, from anti-phishing and cryptographic management to pen testing, identity management and end-point security. Throughout the CyberNYC program, the seven companies completed a four-month intensive series of workshops, specialist-led lectures and one-on-one mentoring sessions with JVP. The start-ups had to overcome the significant challenges faced by businesses, made all the more difficult due to the restrictions and obstacles caused by the COVID-19 pandemic.

Addressing the event online from Jerusalem, Founder & Chairman of JVP & Margalit Startup City, Erel Margalit, commented, “We are happy to have arrived at this event with seven companies that withstood the test of time and are continuing with us from all over the world. Despite the world gone crazy, you all continued to do great work and are moving forward building your businesses for your products.”

Regarding the participation in the CyberNYC program, Founder & CEO of VU, Sebastián Stranieri, said, “We are happy of having been able of coming together at Margalit Startup City New York’s International Cyber Center. We appreciate the support of the NYCEDC, and we are honored to collaborate in the buildout of the cybersecurity ecosystem in New York City. This opportunity will allow us to continue our expansion through the US market from New York, a city that will undoubtedly become the most important cybersecurity hub in the world.”

Gastón Gené, COO, VU, who is currently based in New York, remarked the importance of working along JVP in this stage of the company. “Up to September 2020, we have grown 73% in comparison with 2019, and we expect to reach a 100% growth by the end of the year. After closing our first deals in Spain, our next step is to open in the US, a process that was accelerated thanks to the Play CyberNYC program and the possibility of getting to know key players in the New York cyber ecosystem.”

ABOUT JVP http://www.jvpvc.com
Jerusalem Venture Partners (JVP) was founded and led by Dr. Erel Margalit, is an internationally renowned venture capital fund. JVP has to date raised $1.4 billion across 9 funds, and has been listed numerous times by Preqin, and other rankings, as one of the top-ten consistently performing VC firms worldwide. JVP has built over 140 companies, leveraging a broad network of partners and market expertise to help companies become global market leaders. JVP has been chosen by New York City and EDC to lead the cyber security cyber hub in NYC. Among the pioneering firms of the Israeli venture capital industry, JVP has been instrumental in building some of the largest companies out of Israel, facilitating 12 Initial Public Offerings on NASDAQ including CyberArk Software, QLIK Technologies and Cogent Communications and more.