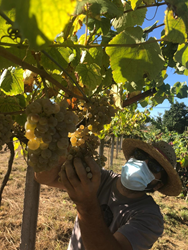 Harvest work began the last week of August, a little earlier than usual. Favorable weather made it possible for us to begin as soon as the grapes reached peak maturation and to proceed in a steady and calm manner for five weeks.

D.O. Rías Baixas has completed the 2020 harvest with a positive outlook on overall grape quality and COVID-19 health and safety practices. This year’s harvest started early on August 27 and ended on October 2. Highly favorable weather conditions throughout the growing season supported a 6% increase in yields, up from below average levels in 2019. D.O. Rías Baixas anticipates an outstanding 2020 vintage marked by exceptional aromatic intensity and balanced acidity, excellent news for worldwide fans of the Albariño variety.

Agustín Lago, Technical Director of the region’s Regulatory Council, notes: "Harvest work began the last week of August, a little earlier than usual. Favorable weather made it possible for us to begin as soon as the grapes reached peak maturation and to proceed in a steady and calm manner for five weeks.” Lago forecasts high expectations for the region’s 2020 vintage, following grape must trials that reveal “aromatic intensity and balance,” a hallmark of the region’s world-class Albariño white wines.

2020 marked a return to typical yields throughout the region, as compared to 2019 which faced lower yields after adverse spring conditions. 159 wineries participated in the 2020 harvest, collecting 3.75 tons of grapes per acre across 10,106 acres of the region’s registered production area.

COVID-19 Protocols are a Success
The 2020 vintage was also successful from a universal health standpoint. The Regulatory Council of D.O. Rías Baixas worked with the region’s wineries to adopt safety and wellness protocols to protect 4,687 harvest workers from COVID-19. Mandatory practices included mask-wearing, hand-washing and social distancing measures for all harvest workers and technical staff. Workers were also offered virus and antibody testing prior to the start of work in August.

Breakdown by varieties and sub-regions
In Rías Baixas, dry white varieties represent 99% of the grapes harvested, 96% of which are Albariño (on average). 36,376 tons of Albariño were harvested this year, followed by the Caiño Blanco, Loureira and Treixadura. Red grape varieties represent less than 1% (0.92%) of total production, led by plantings of Sousón, Mencía and Caiño Tinto. Val do Salnés, one of the five main subzones of Rías Baixas, continues to be the highest production area, representing 64% of total production, followed by Condado do Tea (21%) and O Rosal (9.3%).

About D.O. Rías Baixas
Denomination of Origin (D.O.) Rías Baixas is renowned for the Albariño grape, an indigenous variety that produces some of the world’s foremost white wines. Located in the Galicia region of northwestern Spain, the D.O. was formally established in 1988. Albariño has always been the flagship of this coastal region. In Rías Baixas’ unique climate, Albariño shares the same mineral-rich soils and cool climate as the world’s leading white wine regions, including Loire Valley, New Zealand and the Rhine. The USA is Rias Baixas’ most important export market and demand continues to grow. Click here for more information about Albariño wines from Rías Baixas.