D.W. Rucker's newly released “FORGOTTEN HALO” is a stirring saga depicting the struggle of mankind and malakim to overcome evil.

“FORGOTTEN HALO” from Christian Faith Publishing author D.W. Rucker is a narrative of the angelic malakim's quest to shield mankind from his own evil. 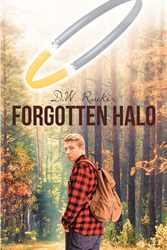 “FORGOTTEN HALO”: a thrilling narration of an elder brother race protecting the younger, fallen race from the darkness released upon the world by his own choosing. “FORGOTTEN HALO” is the creation of published author D.W. Rucker, a person drawn to an immense range of pursuits and who has lived in moments of acclaim and great struggle, but his hope is ever to strengthen and uplift those he can reach.

Rucker writes, “The angry wolf snarled, and the girl choked out an involuntary, terrified cry. Her back found the base of a tree, and she slid herself against it, trying to envelope herself in the strong wooden arms. The wolf pressed in as the child curled against the tree roots, one tiny foot raised to strike the beast again. The protector’s chest heaved with pride as he witnessed the courage of the overmatched child. Her other foot lay twisted on the ground, slowly becoming saturated with fluid from her mangled flesh. The fight was almost over, and the wolf innately understood the way it would end. The protector’s sword emerged. But he was still too far away. He would be too late. In the slow instants of time and space, he knew that this child was beyond his immense speed. The wolf was out of reach of the beautiful power of his upraised sword of light fire. Then a brilliant flash shattered the darkness.”

Published by Christian Faith Publishing, D.W. Rucker’s new book is a compelling tale of bravery and endurance in the face of hidden enemies.

With this book, Rucker desires to expose a forgotten brotherhood and enemy to today's generation.

For additional information or inquiries about “FORGOTTEN HALO,” contact the Christian Faith Publishing media department at 866-554-0919.