Daisy G. Collins’ book “Without Us, No U.S.R- Volume 1” is an analysis of the critical contributions made by enslaved African American people to American prosperity

Recent release “Without Us, No U.S.R” from Page Publishing author Daisy G. Collins is a clarion call for an official apology from the United States to the enslaved African American Ancestors and, on their behalf, to their descendants, and a material recognition of the essential role of enslaved persons in laying the financial foundation for the most powerful economic country in the world. 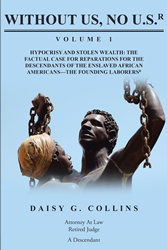 Daisy G. Collins, an attorney at law and retired federal administrative law judge currently residing with her husband in the Cleveland, Ohio area, has published her new book “Without Us, No U.S.R- Volume 1”- a persuasive argument for every American to recognize, understand, and appreciate the indispensable role that the enslaved African American Ancestors played in the making and saving of the United States of America.

The author writes, “There are several reasons that African Americans can say accurately, on behalf of their enslaved African American Ancestors and themselves, ‘Without Us, No U.S.R’ Just two of the reasons are the following:

“1. Without the agreement to keep the African American Ancestors enslaved, the union of the thirteen colonies would not have been formed and the United States would not exist in its present form; and

“2. Without the wealth created by the unpaid, forced, and very valuable labor of the enslaved African American Ancestors—the Founding LaborersR—that laid the economic foundation of the United States of America, this country would not be the economic power it is today.

“One interesting statistic is that in 2013, black women earned 64 percent of the amount white men earned, and black men earned 75 percent. Apparently, America still treats the descendants of the enslaved persons as ‘“three-fifths of all other persons”—or little more than that—just as the original Constitution did. (Three-fifths is 60 percent.) Fairness requires some form of reparations to correct this imbalance!

The United States Government should say ‘Thank you’ and it should apologize.”

Published by Page Publishing, Daisy G. Collins’s engrossing book is a compelling discussion of the enormous historical contributions of enslaved people African American to the prosperity and economic might of America.

Readers who wish to experience this illuminating work can purchase “Without Us, No U.S.R -Volume 1” at bookstores everywhere, or online at the Apple iTunes store, Amazon, Google Play, or Barnes and Noble.