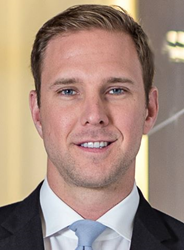 Mr. McCarty has played vital roles in many of Caldwell Cassady & Curry’s most notable courtroom victories

Mr. McCarty earned the promotion based on his demonstrated leadership within the firm and his extensive track record for clients in intellectual property disputes, class actions, trade secret claims, and commercial litigation.

“Since Warren joined our firm, he has demonstrated time and again both the skills and critical thinking that are needed to resolve our clients’ high-stakes cases,” says firm principal Brad Caldwell. “Everyone here is proud to work alongside Warren, and we’re looking forward to many more successful years together.”

A month before that win, Mr. McCarty helped VirnetX Inc. secure a $502.8 million damages verdict against Apple Inc. for infringing two VirnetX patents that Apple used to enable features on the iPhone and other devices. The award handed down by a jury in the U.S. District Court for the Eastern District of Texas is ranked as the 4th largest verdict in the nation during 2020.

Mr. McCarty is admitted to both the Texas and Illinois state bars. His legal track record includes practicing in the U.S. District Courts for the Northern, Eastern, and Western Districts of Texas, the U.S. Court of Appeals for the Federal Circuit, and numerous other state and federal jurisdictions.

A graduate of the University of Virginia School of Law, Mr. McCarty earned his undergraduate degree in business administration at Illinois State University. Before joining Caldwell Cassady & Curry, he practiced in the Chicago office of Winston & Strawn.

Caldwell Cassady & Curry represents companies and individuals in high-stakes civil litigation, including patent infringement cases, trade secrets claims, fiduciary duty cases, class actions, and disputes involving company founders. The firm has tried and won some of the nation’s top verdicts against the largest companies in the world. Learn more about the firm at http://www.caldwellcc.com.

For more information, contact Bruce Vincent at 214-763-6226 or bruce.vincent@muselegalpr.com.