“Rise of the Hell Fire Storm: Book 1” from Christian Faith Publishing author Damian L. Johnson is a thrilling tale of one man’s fight to bring equality to the world against all odds. 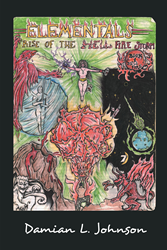 Johnson shares, “In the year 2030, a cluster of astral diamonds came to earth from the depths of the universe and gave all life on earth elemental spirit power manipulation. But this great gift cost the human race everything they had built so far.

“Fifty-one years later, Dante Saint will attempt to rebuild a fallen rebellion his parents had formed seventeen years ago. The hellfire rebellion was formed to overthrow a powerful force lord of the world’s richest city—7-Nations. This city is the last city of pure humans and the city that controls the world’s resources.

“With the last of his family and a fiery storm of elemental power, Dante will try to bring equality to the world, but the death of his parents and the Hellfire Clan weigh heavy on his heart. Dante must look deep within and use the power of elemental ascension to do the impossible.

“Ascension—the art of mastering mind, body, and spirit by absorbing new levels of elemental power; an awakened one can unlock the power of the higher mind and walk the earth as the highest potential. Will Dante do it?

Will Dante Saint be able to overcome the substantial odds stacked against him? Readers will find themselves rooting for the underdog in this futuristic tale.

View a synopsis of “Rise of the Hell Fire Storm: Book 1” on YouTube.

Consumers can purchase “Rise of the Hell Fire Storm: Book 1” at traditional brick & mortar bookstores, or online at Amazon.com, Apple iTunes store, or Barnes and Noble.

For additional information or inquiries about “Rise of the Hell Fire Storm: Book 1,” contact the Christian Faith Publishing media department at 866-554-0919.