Dan Priatko’s Life Changed, But He Would Not Allow it to End

Xulon Press presents an inspiring story of strength and perseverance. 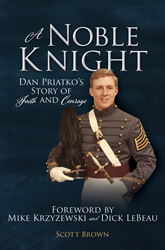 [Dan’s] remarkable journey is one of faith, family, and the power of perseverance.

Dan Priatko, an Army Ranger and West Point graduate, was poised to leave for his first deployment when a tragic car accident changed everything. After spending more than a year in a coma, he had to re-learn basic tasks such as walking and talking. Neither he nor his family flinched, and Dan made a miraculous recovery. His positive attitude continually inspires others, including legendary Duke men’s basketball coach Mike Krzyzewski and Pro Football Hall of Famer Dick LeBeau. Each wrote a foreword for A Noble Knight.

“[Dan’s] remarkable journey is one of faith, family, and the power of perseverance. Most of all it is about someone who was robbed of so much but refused to let a tragedy take his essence,” Brown said.

Xulon Press, a division of Salem Media Group, is the world’s largest Christian self-publisher, with more than 15,000 titles published to date. A Noble Knight is available online through xulonpress.com/bookstore, amazon.com, and barnesandnoble.com.