Daniel Maher’s new book “Shawn of Sherwood” is an adventurous tale of a young archer in the infamous Sherwood Forest, a new take on the classic story of Robin Hood

Recent release “Shawn of Sherwood” from Page Publishing author Daniel Maher is an exciting tale of adventure and romance in the notorious Sherwood Forest. When the peaceful and prosperous manor of Dorsey is forced to fight for its existence, Shawn Fletcher and his friends battle to defend the manor and rise to the occasion in this work of historical fiction. 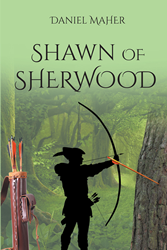 Daniel Maher, a medieval history buff, has completed his new book “Shawn of Sherwood”: an adventurous new take on the well-loved classic story of Robin Hood.

“Having been fortunate to live in Germany during the early sixties, where his father was stationed while in the Air Force, Maher was inspired from a young age. He grew up playing in nearby castle ruins with his friends during a period when Robin Hood stars Errol Flynn and Richard Greene entertained them on their televisions. Since then Daniel developed a lifelong fascination with Robin Hood, Prince Valiant, and the Arthurian romances.” Channeling his fond childhood memories while practicing his archery, Maher let his imagination take him back to Sherwood, hunting the king’s deer, and so his vision was born.

During the early thirteenth century, under the rule of King John, England fell into chaos. Rebellious barons were siding against the king, leaving many neutral nobles to fend for themselves against power-hungry knights and mercenaries. The peaceful and prosperous manor of Dorsey is forced to fight for its existence against the large mercenary army under the evil rule of Sir Gilbert. Shawn Fletcher, a young archer living in Dorsey, rises to the occasion as he, his friends, and the small Dorsey military contingent battle against great odds. When several skirmishes culminate in an action-packed epic battle pitting good against evil, Shawn is faced with the challenge of his life. In a tale of adventure and romance the notable Sherwood Forest comes alive once again, where outlaws are kings and the longbow reigns supreme!

Readers who wish to experience this exciting work can purchase “Shawn of Sherwood” at bookstores everywhere, or online at the Apple iTunes Store, Amazon, Google Play, or Barnes and Noble.