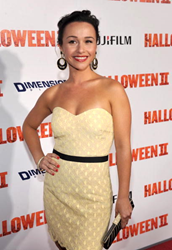 Actress Danielle Harris (notoriously of the Halloween franchise, Once Upon a Time in Hollywood) will be stepping out of the actor’s spotlight and jumping behind the lens alongside legendary helmer Joe Dante (Gremlins, Innerspace, The ’Burbs) to direct an all-female slasher wittily titled Sequel. Though plot details remain under wraps, the title suggests a satirical shredding of the horror industry’s “final girl” trope.

An endearing note, this won’t be the first time the duo has paired. In 1991, Dante cast a thirteen-year-old Danielle Harris in the celebrated Eerie Indiana series, the two having remained in touch since. Dante’s Renfield Productions has more recently cast Ms. Harris in the lead role beside Chad Michael Murray in Shriekfest’s 2018 Best Horror winner, Camp Cold Brook.

The brazen and glaring Danielle Harris erupted onto screens as the niece of prolifically evil Michael Myers in the Halloween films of the 80’s and 90’s. Following with memorable roles in pop-culture icons such as Don’t Tell Mom the Babysitter’s Dead, Free Willy and Roseanne, along with thriller hits Urban Legend and the Hatchet film series. Harris has spent three decades carving her own legacy and brand in the horror world.

Joe Dante is no stranger at making people howl. When it comes to bona fides, Dante’s unimpeachable filmography as director and producer spans several decades of terrific tales, all told with plenty of stylistic flourish and pointed social, political and comedic undertones. Sequel will undoubtedly carry the same aesthetic, youthfulness and cutting edge humor under his judiciously playful producing wing.

Written by notable British scribe James Moran (Doctor Who, Torchwood, Severance), Sequel promises to be a brash, unashamed spectacle led by an all-star cast of take-no-prisoner heroines, and presented by a high-caliber lineup of filmmakers. There is currently no date set for production on Sequel, but Renfield anticipates that cameras will roll by the second or third quarter of 2021.

“Our team knew immediately James [Moran] was rewriting the rules. It’s like he combined Charlie’s Angels and Scream together to get this entirely fresh subgenre of female action slasher. It’s hilarious and adrenalizing - a dragon only Danielle can tame,” said producer Mark Alan.

“Sequel is an ambitious undertaking, but it's in good hands with a pro like Danielle at the helm. I've watched her literally grow up on film and it's about time she got behind the camera to use all the expertise she's picked up along the way. She's intelligent, level headed and clearly qualified to solve the myriad problems a director encounters while making a film,” affirms Joe Dante.

Danielle says of the film, “I knew as soon as I finished reading the first act that Sequel was the perfect fit for me. I could finally bring all of my experiences in the horror genre behind the camera and into these exceptionally written final girl characters. I’ve been on the hunt for a story that had strong female leads and was intelligent and darkly comedic. I just didn’t want to do anything paranormal since we have enough real-life evil without having to go make shit up. If I’m going to spend the next two years of my life on a film, it has to be fun - and this story has it all. With Joe Dante and Mark Alan by my side, we’re gonna kill it.”

Writer James Moran adds: “I couldn’t be happier to have Danielle captaining this - who better to marshal a group of heroines in a slasher movie?! Making a movie with the incredible Joe Dante is a dream come true, he’s a huge influence on my work. Everyone involved is super smart and creative, I feel like I won the slasher lottery. And survived…"