Dark Sky, the First Novel in the Award-Winning Max Bowman Series, to Be Featured on BookBub.com

The world’s premier eBook platform will make available to its members a free download of the acclaimed comedy-thriller, which features the first misadventure of America’s unlikeliest—and oldest—action-hero 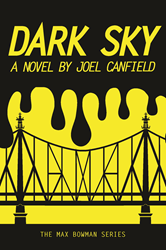 Canfield supplements his genre piece with a profound theme of fatherhood… a detective story whose imperfect protagonist boasts endearing qualities just below his rakish exterior.

Dark Sky, the first novel in “The Misadventures of Max Bowman” detective series, has been selected by BookBub.com to be featured on its website on August 8, 2020. BookBub only accepts 10 to 20% of submissions, currently has 15 million subscribers to its service, and has been profiled in The New York Times, Forbes, and The Guardian, among other media outlets.

Dark Sky, which was also chosen to be featured in Kirkus Reviews magazine upon publication, was written by novelist and screenwriter Joel Canfield. The book introduces Max Bowman, a boomer ex-CIA analyst thrown out of the agency for his rocky relationship with Jack Daniels and a man who thinks his future is in the rearview mirror. Then his old boss shows up with a job that’s way above his pay grade—tracking down the truth about a war hero who was killed in Afghanistan, because some people think this dead man isn’t so dead. And suddenly, he’s saddled with a 19-year-old sidekick and they both end up dodging bullets from an assassin who’s styled himself after the classic TV hero, The Rifleman.

In the words of Kirkus Reviews, Max Bowman “will grow on readers. He’s undeniably gruff and his first-person narrative remains relentlessly sarcastic. Max’s bluntness, however, makes him the story’s most honest character—and most reliable, since he’s surrounded by people either lying or hiding something. His unsentimental relationship with girlfriend Jules, too, is more believable than most: their repeated phone conversations consist of Jules’ loud curses in lieu of sweet nothings. Canfield likewise supplements his genre piece with a profound theme of fatherhood…a detective story whose imperfect protagonist boasts endearing qualities just below his rakish exterior.”

Dark Sky is available on Amazon.com in paperback, eBook and audiobook formats, as are the three subsequent installments in the series, Blue Fire (a 2016 Benjamin Franklin Digital Awards Silver Honoree and a Publisher’s Weekly Book Life Prize in Fiction semi-finalist), Red Earth (a 2017 Benjamin Franklin Digital Awards Gold Honoree), and White Rain (chosen for inclusion in the February 1, 2020 issue of Kirkus Reviews magazine).

Joel Canfield is the creator/writer of the Max Bowman series as well as the co-writer of the TV movies, Eat, Play, Love; Yes, I Do and the upcoming The Christmas Watch. He lives in Long Beach, California with his wife/co-writer/editor Lisa and their dog Betsy. As Get Hip Creative they provide scriptwriting, ghost writing, copywriting, consulting and coaching services.