“Timelines” from Christian Faith Publishing author Darrel Dillon is a riveting tale that shows how the universe arrives at the height of intergalactic chaos in the distant future. 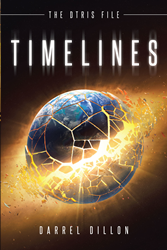 “Timelines”: a story about the known, unknown, visible, and invisible, a tale about the war of God and evil juxtaposed over the war between man against man and man’s impaired ability to discriminate between the wars. “Timelines” is the creation of published author Darrel Dillon, a man who joined the U.S. Navy in 1966 and served 10 years of active duty on three destroyers. During that time he was on four six-month tours of duty in the South China Sea and Vietnam. He has also been an avid reader since childhood, a fan of authors such as Edgar Rice Burroughs, Michael Crichton, Clive Cussler, and Frank Herbert.

Dillon writes, “The story opens as David Mark is resurrecting his life from the depths of disillusionment with humanity’s moral decay. After meeting a mysterious man named Lewis Chester, he gets a thought-recording device implanted in his brain, the first step in the process of leaving planet Earth—and then the global rains begin.

“It’s his twin sister, Darla, who unravels the story of David’s fantastic space adventure as she transcribes his DTRIS file a year later. She was transported to the Logos Station, a spherical sanctuary at the edge of a void, shortly after her brother disappeared.

“Through this intriguing tale, you’ll learn how events of Earth’s past, present, and future are tied to invisible forces and secret agendas, as the actions of the Nobel, the Sangar, the Earing, the Ictol, and other alien species are unveiled.

“This first book in a compelling new science-fiction saga, The DTRIS File: Timelines narrates the spellbinding story of how the universe arrives at the precipice of all-out intergalactic war in the not-so-distant future.”

Published by Christian Faith Publishing, Darrel Dillon’s new book is a wholesome science-fiction that tells a story of how the wickedness of man and the spread of indecency brought the time of galactic reorder—time when man, blinded to his dark ways, would not turn back.

With this purpose, Dillon aims to bring the readers into an extraordinary experience, as this book unveils the war between good and evil enabling to see how the past, present, and future are connected to the concealed forces and hidden agendas.

Consumers can purchase “Timelines” at traditional brick & mortar bookstores, or online at Amazon.com, Apple iTunes store, or Barnes and Noble.

For additional information or inquiries about “Timelines,” contact the Christian Faith Publishing media department at 866-554-0919.