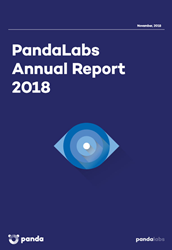 The new annual report from PandaLabs is here.

The report, based on customer threat data collected by PandaLabs, dives into several key forces that will shape cybersecurity in the coming year:

Live hacking: As organizations go to increased lengths to protect themselves in 2019, difficult-to-detect, malwareless attacks will grow at a faster rate compared to traditional malware like Trojans or worms.

Digital sovereignty in security: Geopolitics has already had an influence in the digital world in 2018, and PandaLabs expects that trend to continue. 2019 will likely see the rise of European digital sovereignty, a 4th bloc alongside the USA, China and Russia. This will influence cybersecurity strategy and policy and will affect purchasing decisions in the cybersecurity space.

Increase in supply chain attacks: These attacks infiltrate development projects of companies or legitimate software products and imbed a malicious code, which is then passed on to users through future software updates. These cases are likely to become more common in 2019 due to their effectiveness and wide reach.

Attackers adopting AI: As artificial intelligence continues to become more accessible and widely understood, it is likely that attackers will use it to design algorithms that automatically discover new ways to attack organizations.

New catastrophic vulnerabilities will be discovered: Many cybersecurity experts believe Meltdown and Spectre are just the beginning when it comes to major vulnerabilities. With similar discoveries possible in 2019, cybercriminals will be ready to exploit these vulnerabilities.

More attacks on routers and IoT devices: IoT devices are usually not as secure as typical endpoints such as laptops or smart phones, making them prime targets for attack in 2019.

Abuse of data & fake news: Increased access to big data makes it easier than ever for attackers to execute personalized attacks on unsuspecting victims by impersonating a person or organization. Due to the effectiveness of these attacks in 2018, PandaLabs expects to see an increase in these types of attacks in the new year.

In addition to next year’s trends, the report looks back at 2018, profiling prevalent trends from the past year including traditional malware, RDP attacks and cryptojacking.

The report also outlines Panda’s strategies for protecting customers from cybercrime as attacks become more sophisticated. Panda classifies every unknown executable as either “safe” or “unsafe” before allowing it to run. This approach, combined with behavioral analysis and anti-exploit modules, means only legitimate software operates on customer devices. Any security threat is identified and remediated by PandaLabs’ team of experts on behalf of customers, eliminating the need for an in-house IT resource dedicated to threat remediation.