Auction of US patents for data center cooling technology is available on the Ocean Tomo Bid-Ask™ Market. 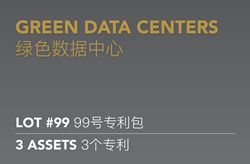 This invention allows the energy produced from the heat energy production to reduce the total amount of electrical energy use by data centers, reducing human influence on the environment like greenhouse gases.

This invention allows the energy produced from the heat energy production to reduce the total amount of electrical energy use by the data center in order to reduce the human influence on the environment, such as to reduce greenhouse gases. The patented data center cooling system breaks through the limitations of geographical locations and overcomes the limitations of the immersion cooling method limited by the materials of the server.

To request bidder credentials or for further information on this auction or other auctions on the Ocean Tomo Bid-Ask™ Market, contact Layna Guo at Layna@OTI.com or 1-312-327-8179.