The National Polish-American Sports Hall of Fame (NPASHF) announced today that Dave Dombrowski, President of Baseball Operations for the Boston Red Sox, is the recipient of the organization’s Excellence in Sports award. 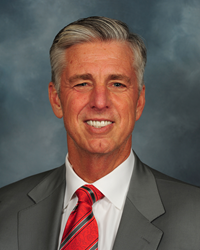 The National Polish-American Sports Hall of Fame (NPASHF) announced today that Dave Dombrowski, President of Baseball Operations for the Boston Red Sox, is the recipient of the organization’s Excellence in Sports award.

Dombrowski is the sixth winner of the NPASHF’s Excellence in Sports award, presented annually to a Polish-American athlete or sports personality for achieving the highest level of accomplishment in their field. He will be recognized at the NPASHF’s Annual Induction Dinner on Thursday, June 20.

In his 40 years of service, Dombrowski has established himself as one of the most distinguished executives in Major League Baseball history. With Dombrowski at the helm, his clubs have amassed well over 2,000 wins resulting in numerous trips to the Postseason and four pennants. This past fall, the Boston Red Sox team he constructed earned him his second World Series title, making him one of a handful of executives to be the architect of a World Series winner in both the National and American Leagues.

Throughout his career with the Chicago White Sox, Montreal Expos, Florida Marlins, Detroit Tigers and Boston Red Sox, Dombrowski has received numerous awards for his achievements in baseball, including Baseball America’s Executive of the Year award in both 2006 and 2018. At MLB’s annual General Managers Meetings, he has been recognized several times with the John Schuerholz Longevity Achievement Award for his years of service as a General Manager and President of Baseball Operations, most recently in November 2018 for reaching 30 years in those roles. Dombrowski was a co-recipient of The Sporting News’ Executive of the Year Award with Milwaukee Brewers GM Doug Melvin in 2011 and received the Andrew “Rube” Foster Award the same year presented by the Negro Leagues Baseball Museum as AL Executive of the Year. In addition, he was named Sports Executive of the Year at the 10th annual March of Dimes National Athletic Awards dinner in February 1998.