“Bondage Broken” from Christian Faith Publishing author David L Lewis is a romantic, historical fiction set in the time leading up to, and including, the Civil War. 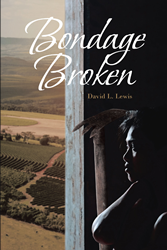 “Bondage Broken”: an intriguing exposition of the horrific drama of the decision to become a runaway and the plight that followed. “Bondage Broken” is the creation of published author David L Lewis, a man who served in the US Army before dedicating the next twenty-five years to corporate America, specializing in teaching field engineers’ computer skills. His writing experience has blossomed from a humble beginning in the corporate world of inter-departmental communication creating training manuals, marketing material to writing drama skits, a play, poetry, and short articles for the Ohio Historical Society.

Lewis writes, “Bondage Broken, a stirring and heartrending story about a perilous, uncertain plight a family endured, starting in South Africa, in 1784. Captured along the Congo River, the family and their leader, Prince Kiume, were loaded onto a slave ship destined for the Americas. Somehow, they survived a deplorable ocean voyage, only to experience family separation on the Auction Block by South Carolina slave merchants. Sadly in 1814, the prince’s grandson, Uhuru (Jacob), was stolen from the Mulberry Hill Plantation and forced to perform hard labor in the fields of the Stewart Creek Plantation in Tennessee. Later, Jacob’s family decided in 1862, during the Civil War, to step into the darkness of the unknown and travel northward as runaways on a precarious uncertain journey.”

Published by Christian Faith Publishing, David L Lewis’s new book is an eye-gaping reminder to the readers that many runaways converted to Christianity and relied on their faith to see them through.

With this purpose, Lewis shares his discovery of the inhumane treatment of plantation life, especially the ocean voyages of slave ships.

For additional information or inquiries about “Bondage Broken,” contact the Christian Faith Publishing media department at 866-554-0919.