NAfME announced that David LaMorte, Assistant Principal of Visual, Performing, and Career Arts at Tottenville High School in Staten Island, New York, is the recipient of the 2018 George N. Parks Award for Leadership in Music Education. Mr. LaMorte received the award during the Opening Ceremony at the Bands of America Grand National Championships in Indianapolis on Saturday, November 10, 2018. 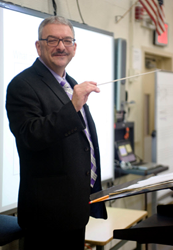 The George N. Parks Award honors an exemplary music educator who embodies the characteristics and leadership that Mr. Parks showed his students every day, and with his dedication to all of his students and teachers, David LaMorte is certainly deserving of this year’s honor.

The National Association for Music Education (NAfME) announced that David LaMorte, Assistant Principal of Visual, Performing, and Career Arts at Tottenville High School in Staten Island, New York, is the recipient of the 2018 George N. Parks Award for Leadership in Music Education. Mr. LaMorte received the award during the Opening Ceremony at the Bands of America Grand National Championships in Indianapolis on Saturday, November 10, 2018.

“The George N. Parks Award honors an exemplary music educator who embodies the characteristics and leadership that Mr. Parks showed his students every day,” said Michael J. Blakeslee, executive director and CEO of NAfME. “The recipient must have a collaborative spirit, dedication to knowing the students as people, perseverance and enthusiasm, and an ability to instill qualities in students beyond the musical. With his dedication to all of his students and teachers, David LaMorte is certainly deserving of this year’s honor.”

“David LaMorte is my supervisor, and, for the past 22 years, he has inspired his entire department (21 staff members in Music and Art) to always put students first, engage families, and save each child one-at-a-time,” said JoAnne Nolemi, vocal music educator at Tottenville High School. The marching band “is a gigantic ensemble, because Dave believes that the forgotten child should have a chance. Every child can learn and grow.”

Under David LaMorte’s leadership, Tottenville’s six bands, three symphonic orchestras, four choruses, training ensembles, and championship marching band enjoy a reputation for musical excellence which is a beacon for New York City and New York state. His symphonic band regularly receives a New York State School Music Association (NYSSMA) Gold Rating in Level VI, as do many many other of Tottenville’s bands, orchestras, and choruses. A professional trombonist as well as conductor, Mr. LaMorte received his education at Montclair State College and the University of Buffalo. He is a recipient of the DaVinci Award; Phi Delta Kappa Leadership in Education Award; City of New York Proclamation Award; Music Educators of New York City Outstanding Service Award; The Chapel of Four Chaplains Legion of Honor Award; among other awards and honors.

Mr. LaMorte also serves as Executive Director of the Summer Arts Institute, a special program that attracts gifted New York City music and art students to participate in a summer of rigorous and creative performance endeavors. He is also conductor of the Staten Island Community Band, New York City’s longest-running community band. He has conducted at Carnegie Hall, Lincoln Center, and throughout the metropolitan area. Fans of classic movies can see a young David LaMorte in the legendary film Fame, which was made at his alma mater, The High School of Performing Arts in Manhattan.

When asked about how he defines success in his programs, Mr. LaMorte responded, “Upon recently attending a New York City Department of Education ‘Salute to Music’ concert at Carnegie Hall, I realized that, of the eight music teachers conducting this prestigious program, six were my former students. As I watched them conduct, I had tears of joy in my eyes knowing that I truly made a difference in those teachers’ lives, and that they are now molding future musicians and conductors and truly making a difference in the lives of their students.”

“Will all of my students become music teachers and conduct at Carnegie Hall? No, but there is a kaleidoscope of opportunities for each of them,” he continued. “I want every child to realize that he or she is a golden key and that every key has ridges and bumps, but with it there is a door that can be opened. My goal is for every student I meet to achieve that full potential, and to unlock their special and very unique ‘own’ door.”

“He helped me to grow as a musician when I started to play the horn again after a hiatus of 33 years,” shared colleague Albert Vázquez, lead hornist in the Staten Island Community Band. “I now play in two community bands, a chamber orchestra in Upstate New York, and in an orchestra in Manhattan. I attribute my musical growth to Mr. LaMorte’s encouragement and mentoring. As a retired New York City high school principal and adjunct professor of secondary education, I can state without any equivocation that David LaMorte richly merits the George N. Parks Leadership in Music Education Award.”

“As a student, it was evident to all that Mr. LaMorte had the ability to create, what we thought was, magic,” said colleague Laurie D’Amico. “We all wanted nothing more than to meet his high expectations. He taught us the valuable lesson that if we did not achieve our goals, we did not let him down, we let each other down. As I progressed through the Salute to Music program, it was Mr. LaMorte who made me realize I wanted to become a music educator.” Ms. D’Amico first met Mr. LaMorte when she was a nine-year-old saxophone student and today is now the Assistant Band Director at Tottenville High School. She continued, “The core of Mr. LaMorte’s abilities is his capacity for understanding each student as an individual. He recognizes that while he is at Tottenville High School to teach music, and supervise a group of over fifteen teachers of various subjects, that he is also here for students to take a little of what they learn from him for the rest of their lives.”

Developed by NAfME and Music for All, the award is named for George N. Parks (1953–2010), director of the University of Massachusetts Minuteman Marching Band at the University of Massachusetts Amherst from 1977 until his death. Considered a national authority on drum majoring, he led the George N. Parks Drum Major Academy®, a summer workshop program for high school drum majors. View past recipients here.

David LaMorte is the Director of Bands as well as overseeing a team of 21 music and arts educators at Tottenville High School.David LaMorte in the classroom