David Monroe Barto’s newly released What Lies Beyond, Within is a thought-provoking novella that takes readers on an unexpected journey of fate

What Lies Beyond, Within from Christian Faith Publishing author David Monroe Barto is an action-packed tale of time travel, unexpected revelation, and a surprising love that will have readers racing to see what comes next 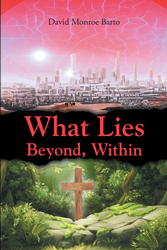 What Lies Beyond, Within: an enjoyable futuristic fiction. What Lies Beyond, Within is the creation of published author David Monroe Barto, who received the 2017 Albert Nelson Marquis Who’s Who Lifetime Achievement Award, given to those who achieved career longevity and demonstrated unwavering excellence in their chosen fields. Barto’s chosen fields were teacher, actor, musician, and park ranger. He is best known for combining all four of those areas in his over one thousand Henry David Thoreau and John Wesley one-man shows throughout the United States and England. For these, he was featured on radio and television specials and in newspapers, including The New York Times.

Barto shares, “Never did the young man realize during his spiritual crisis that his heartfelt prayer of desperation would be answered in such a dramatic way. For David, this means being a witness to life in the end-times of the world, to unexpectedly falling in love, and to facing an enemy he never figured on while growing up in Pittsburgh, Pennsylvania. Join him for the adventure of his life!”

Published by Christian Faith Publishing, David Monroe Barto’s new book will captivate the imagination as readers journey with David on an adventure of epic proportions across time and space.

Barto packs a punch within the pages of this short but impactful narrative that is certain to entertain and delight.

Consumers can purchase "What Lies Beyond, Within" at traditional brick & mortar bookstores, or online at Amazon.com, Apple iTunes store, or Barnes and Noble.

For additional information or inquiries about What Lies Beyond, Within, contact the Christian Faith Publishing media department at 866-554-0919.