David R. Kosak’s newly released “Anna Mae’s Buckshot: A Novel About the Power of God’s Love” is a compelling historical fiction with heart.

“Anna Mae’s Buckshot: A Novel About the Power of God’s Love” from Christian Faith Publishing author David R. Kosak is an exciting Civil War-era novel that takes readers on a journey of faith as a special horse works to heal and open a young girl’s heart. 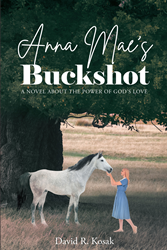 “Buckshot, on the other hand, thinks Anna Mae is the child’s mother, who has returned to take care of him. The lovelorn horse vies for Anna Mae’s affection, only to be repeatedly rebuffed by the child. An incident on the first day of school, however, changes everything.

“Known only to Mary, the special horse that endured the brutality of the Civil War and survived a suicidal and senseless cavalry charge in the closing moments of Gettysburg was sent by God. The horse’s mission, as Anna Mae will discover, is to unleash the greatest power entrusted to her by God. A power greater than anything man can muster, and entrusted to all humanity.

“The power of love.”

Published by Christian Faith Publishing, David R. Kosak’s new book will tug at the heartstrings as a touching story of hope, faith, and determination unfolds.

Kosak balances engaging historical facts with an emotionally charged family narrative that will have readers racing to learn the truth of Buckshot’s history.

Consumers can purchase “Anna Mae’s Buckshot: A Novel About the Power of God’s Love” at traditional brick & mortar bookstores, or online at Amazon.com, Apple iTunes store, or Barnes and Noble.

For additional information or inquiries about “Anna Mae’s Buckshot: A Novel About the Power of God’s Love,” contact the Christian Faith Publishing media department at 866-554-0919.