Book looks into the two centuries of surgery in Papua New Guinea. 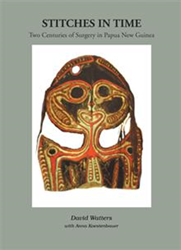 “Stitches in Time” deals with the history of surgery in Papua New Guinea from the time of the first European contact to the emergence of sub-specialist national surgeons. It begins with the first impressions of ship surgeons, missionaries and traders, who witnessed the amazing trephination skills of village medicine men residing in the Bismarck Archipelago. With the arrival of colonial government, this story progresses to the introduction and development of surgery, describing the pioneers and colourful characters drawn by a sense of adventure to an unknown land as missionaries, medical officers or surgeons.

During the late 19th and first half of the 20th century, the country changed greatly as a result of exploration, evangelisation, colonisation, and war. The history traces the surgical challenges encountered and the individuals who were charged to provide the health services run by the missions, companies, governments, and armies. After World War II, Papua New Guinea progressed from Territory to Independent Nation and began to train its own doctors and surgeons. Since then, the pace of change has been so rapid that within one generation, village children became subspecialist surgeons.

The history is comprehensive and well illustrated. It is set within the context of tropical pathology, introduced diseases, and surgical advances worldwide. The text is scattered with mini-biographies, liberally describing the lives and experiences of the many expatriates and nationals who have taken up the challenge of surgery - usually with success, despite limited resources, in often desperate circumstances.

For more information on Stitches in Time: Two Centuries of Surgery in Papua New Guinea, log on to http://www.Xlibris.com.au.

About the Authors
The senior author, David Watters, is Professor of Surgery at Deakin University, based at Geelong Hospital, Barwon Health. He was formerly Professor of Surgery at the University of Melbourne (2000-2010) and the University of Papua New Guinea (1992-2000). Prior to these appointments, he held surgical and academic positions in Hong Kong, Zambia and South Africa. He has written and edited four surgical textbooks on tropical surgery topics. He is a general surgeon with wide-ranging clinical interests including endocrine, breast and gastrointestinal surgery. He has also published many peer reviewed papers covering tropical aspects of trauma, infection, cancer and surgical practice. With this wealth of experience in the developing world, he is well qualified to review the history of surgical treatments and pathologies in the PNG context. He has interviewed many doctors and surgeons, both expatriates and nationals, as well as providing the necessary medical/surgical interpretation and analysis.

The junior author, Anna Koestenbauer, David’s step-daughter, originally an Austrian, grew up in PNG, is bilingual in English and German, but also speaks French and Spanish. These skills that have enabled her to research a number of original German and French texts that is relevant to the surgical history of the 19th and early 20th centuries. She has also drawn the maps and reviewed many of the books written by non-medical authors that were of potential interest to the History of Surgery in Papua New Guinea. She has a gift for writing and brings to the project a nonmedical perspective, important for the book's marketability. She was dux of Geelong Grammar School, has an Arts/Law degree from the Australian National University, and has completed her Masters Degree in Comparative Politics at London School of Economics.