The Delray Beach Downtown Development Authority Advisory Board finalized their 2013-2014 budget, plans and growth strategies for the coming year. 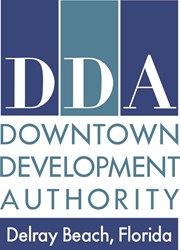 The Delray Beach Downtown Development Authority (DDA), is an independent taxing agency of the city, charged with marketing the downtown, place making of the district and economic development on behalf of the downtown businesses. The DDA Advisory Board met for their monthly meeting Monday, August 12th to finalize their 2013-2014 budget and plans for the coming year.

Over the past several years, the DDA staff and Board have been able to focus their efforts on accomplishing the mission and specific goals set forth by the state. With increased momentum and energy, the DDA Advisory Board and Staff reviewed their goals, objectives and accomplishments, and discussed the new plan along with the budget allocations.

The DDA’s main goal is to continue to market and promote the downtown merchants and businesses within the district through the award winning Night & Day Downtown Delray Marketing Campaign. This year’s marketing campaign will focus on promoting the eight key programs and events produced by the DDA – Shop Local/Small Business Saturday in November, Holiday’s Downtown, Art & Fashion Week in January, Savor the Avenue in March, and Summertime Downtown – just to name a few. Also, the DDA will be investing in advertising both locally and nationally. “The DDA has been instrumental in advertising for the downtown for over 16 years and will continue as the return on the investment has been proven over the years,” states Laura Simon, Associate Director, DDA. “This year alone, the DDA has delivered over 250 million media impressions to Downtown Delray Beach and increasing the visibility of the downtown businesses.”.

The DDA Board agreed this year as proposed by staff to invest more time and resources into the second and third strategic goals, Place Making/Clean & Safe, which is an operational effort supporting the City and CRA in keeping the downtown customer friendly, and boosting economic development. “This is going to be a fantastic year filled with growth and development throughout the entire downtown, with many new construction projects taking place that will enhance the economic impact within Delray Beach. The DDA wants to ensure the businesses are being informed and educated about the projects,” expresses Marjorie Ferrer, Executive Director of the Delray Beach DDA. “The downtown businesses need customers especially during this time of construction and development, we will all work together to ensure to message the Downtown Delray Beach is still a fun place to be even during development.”

As part of the 2013-14 proposed DDA budget, $40,000 of funding was allocated to support, as the DDA has traditionally done for the past 20 years, the City’s 100ft Holiday Tree and First Night Celebration. These events have a very positive impact on the Downtown businesses and the DDA will continue to support on their behalf.

The Downtown Development Authority is committed to accomplishing the goals and objectives that have been set before them. The DDA will continue create a positive impact and proven results to the downtown business community making this historic Village by the Sea a clean, safe, physical and experiential place to live, work and invest.

For the past 40 years, the Downtown Development Authority has assisted in successfully branding Delray Beach as the Village by the Sea. The Delray Beach DDA was created by Resolution 9-71, which became law on March 22, 1971, as a dependent district of the City of Delray Beach.

The main areas of involvement in downtown redevelopment include: Marketing and Promotions; Economic development programs; Security and crime prevention; Traffic and parking; Clean and safe. In addition to the main areas mentioned above, the DDA also works closely with merchants to develop seasonal retail awareness campaigns to generate traffic and sales.