Dean & Anson Vargo’s newly released “Galactic Passages: Planet 6333” is an absorbing novel of an advanced civilization caught in dilemmas of greed and chaos

“Galactic Passages: Planet 6333” from Christian Faith Publishing authors Dean & Anson Vargo is an electrifying story of a distant planet’s conundrum of corruption and societal entropy that births a revolution for freedom. 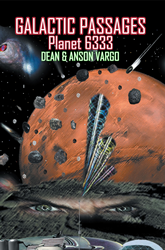 “Galactic Passages: Planet 6333”: a chair-gripping opus set in Raihan, a progressive planet plagued by avarice for dominion and wealth, as it plunges into chaos brought about by radicalism from the other cultures they oppressed. “Galactic Passages: Planet 6333” is the creation of published authors, Dean Vargo, a firefighter at the Minneapolis–St. Paul International Airport and a member of the Minnesota Air National Guard, and Anson Vargo, a freshman at Barnum High School in Minnesota.

Dean & Anson Vargo share, “This is a science fiction adventure about how hunger for wealth and power within a society [Planet Raihan] have resulted in duping other planets into mining valuable ore for them amidst the orbital hazards of Planet 6333. They have severely hurt, cultures along the way; raising themselves galactic prominence through manipulation of the relationship between a planet loaded with valuable ore, and a dimensional portal caught in a gravitational tug-of-war between two suns.

“From the beginning, remote miners are steadily shut off from communicating with their home planet through Raihan manipulation from a secret base located on a nearby moon; eventually feeling neglected and alone just as Planet 6333 enters the dangerous portal zone in the midst of its orbit. The victims ultimately see the Raihans as rescuers rather than kidnappers when they come in the midst of planetary chaos to steal the ore and take them as hostages.

“When examined closer, the Raihan culture is a paper tiger, dissolving from the inside out due to their evil ways. Circumstances arise that allow two smaller planetary forces [the Trecons and Ryderson-Omegans] to band together and challenge the Raihan goliath, but they can’t do it alone.

“The story ends with a surprising twist and points toward future adventures!”

Published by Christian Faith Publishing, Dean & Anson Vargo’s new book is wrought with an unexpected turn of events that are pivotal to the climactic fate of a planet caught in a civil war for morality and liberty.

“Galactic Passages: Planet 6333” also depicts the unreserved will of creatures to persevere and strive for survival and triumph amid the challenges they face in their life’s journey.

View a synopsis of “Galactic Passages: Planet 6333” on YouTube.