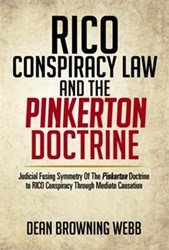 The author advances the argument that Pinkerton v. United States, 328 U.S. 640 (1946), a rule of criminal conspiracy law, is both increasingly and appropriately invoked in the RICO civil conspiracy context, and judicially fusing the concept of “mediate causation” rationally supports that application. Litigating federal RICO issues – both civilly and criminally – is especially exacting and rigorous. Perhaps nowhere is this contentiousness evidenced with increasing intensity and sharply contrasting positions than that specifically addressing the federal RICO conspiracy law.

Thought-provoking and challenging, this publication brings to light the application of the Pinkerton Doctrine to the RICO Conspiracy Law. Readers who are keen to understand more about the laws and enlighten their knowledge with regards to these will find RICO Conspiracy Law and the Pinkerton Doctrine a truly valuable book.
For more information on this book, interested parties may log on to http://www.Xlibris.com.

About the Author
Dean Browning Webb specializes in complex RICO litigation with emphasis on application of the Pinkerton Doctrine in RICO conspiracy. James N. Gross, Esq., of Philadelphia, PA., and the author represent plaintiffs in the RICO conspiracy case of Smith v. Berg, 247 F.3d 532 (3rd Cir. 2001). A member of both the RICO Law Reporter Advisory Board and the Civil RICO Report Advisory Board, the author publishes extensively upon RICO conspiracy law and the Pinkerton Doctrine, as well as addressing RICO aiding and abetting issues. The author is a former staff attorney, 1978 House Select Committee on Assassinations. This project would not have been possible without the dedication and significant contributions of legal assistant, Ms. Mary Jacqueline Evans. The author dedicates this textbook in eternal remembrance of Juretta Elizabeth Oliver.