Military Records Researcher William L. Beigel details poignant history of the US “Return of the Dead” from World War II 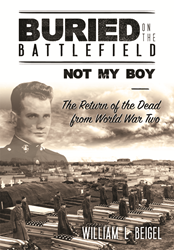 "Buried on the Battlefield - Not My Boy" by William L. Beigel

“Is this much to ask, considering they took all I had in the world. My whole life’s work. Would it be asking too much to have just one son’s remains back, that I might lay a few flowers on it, to ease just a small bit of pain?” ~ Tessie Fast, mother of Guido and J.B. Fast (Ch. 22)

Nearly every American family has a close relative who served in World War II, yet few are aware of the massive effort by the US government to locate, identify, and respectfully disinter and relocate hundreds of thousands of our heroic fallen after the largest war the world has ever seen. "Buried on the Battlefield – Not My Boy: The Return of the Dead from World War Two," the non-fiction debut from WWII researcher and historian William L. (Bill) Beigel, is the first comprehensive book for general audiences ever published on this topic.

Few people know that the United States was the only nation to bring home our war dead after World War II. With little or no debate in Congress, the bodies of America’s fallen heroes were removed from foreign graves across the globe, often years after they died, sparing no expense by the US government. More than 280,000 were recovered, leaving that number of American families with an agonizing choice: return their beloved sons to the homeland, or let them rest in military cemeteries overseas in the countries they died to liberate.

Told from personal family letters, official documents, contemporary magazine and newspaper articles, historical research, and previously unpublished photographs, "Buried on the Battlefield" is the first book to fully describe the return of the valiant dead to America – or to any cemetery in the world chosen by their next-of-kin – after World War II. The book is in tribute to those who gave their lives, as well as to those who mercifully brought them home.

“A moving tribute to fallen soldiers and their survivors.” – Kirkus Reviews

“This was a story of a few, but it touched not only those 20 lives, but thousands such as mine.” – Everett R.

“We have over 70 years of distance between us and the traumatic events and personal losses of WWII, but there are still people suffering from those losses even today…. I highly recommend this book to any student of WWII or anyone interested in the social history of our country. It's well written and fast moving. You will definitely pause during your reading and consider what you would do if you were in the family's shoes.” – James O.

“After reading this book, one has another reason to be very proud of being an American.” – Mark

His work has been featured by dozens of US media outlets, including USA Today, the New York Times, Los Angeles Fox News and CBS affiliates, and many others. He is a major contributor to the American Air Museum in Duxford, England and he is the official researcher for the Kwajalein MIA Project.

His debut non-fiction book, “Buried on the Battlefield” was published in May, 2019. Beigel earned a B.A. in History and a Masters in Geography, both from UCLA. He is a member of the Society of Military Historians, the Organization of American Historians, and others. For more information, please visit WW2Research.com.

"Buried on the Battlefield - Not My Boy" by William L. BeigelBook cover artwork

"Buried on the Battlefield - Not My Boy" Back CoverBook cover - back