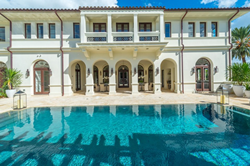 Marc Anthony's home is for sale, one of the largest mansions in South Florida.

“Marc Anthony Selling Gigantic Florida Mansion”
Marc Anthony is asking $27 million for his 21,000-square-foot mansion in Coral Gables, Florida. Quite large even for a celebrity home, Marc bought the unfinished waterfront home near Miami in 2018 for $19 million and then spent several million to finish the home. The mansion is located near other celebrities including Pharrell Williams and Jennifer Lopez's fiancee, Alex Rodriguez.

“Ivanka & Jared Buy $30 Million Lot On Exclusive Florida Island”
Amid much speculation where Ivanka Trump and Jared Kushner will end up after President Trump leaves office, the couple recently purchased a $30 million lot on South Florida's uber-exclusive Indian Creek. One of the most secure locations in the U.S. with a number of top CEOs as home owners and with its own 13-member police force, the island is often referred to as “Billionaire's Bunker.” Ivanka and Jared bought the lot from singer Julio Iglesias.

“Historic Barron Hilton Mansion”
The longtime L.A. home of Barron Hilton is for sale at $75 million. Barron, who died in 2019, was the son of Hilton Hotels-founder Conrad Hilton and grandfather of Paris Hilton. The 15,000-square foot home in the exclusive Holmby Hills neighborhood was designed in 1936 by legendary-Black-architect Paul R. Williams for CBS CEO Jay Paley.

“Kim Cattrall's Home in the Hamptons”
The East Hampton home that Kim Cattrall bought for $450,000 in 1998, the first year of Sex and the City, is for sale at $2.9 million - recently reduced from $3.25 million. The listing includes the 1,232-square-foot main home and a 336-square-foot-separate studio.

“Another One For Oprah”
Oprah Winfrey owns several homes including her recent purchase of actor-friend Jeff Bridges' ranch in Santa Barbara. The 3,517-square-foot, two-bedroom, three-bath Spanish Revival-style home was originally built in 1919 on four acres of gardens. The home still has its original windows, doors, hardwood floors and five fireplaces. Oprah paid $6.85 million for the home.

“Priscilla Presley Gets $13 Million”
After their divorce in 1973, Elvis Presley stayed in their Beverly Hills family home while Priscilla Presley bought a home near him in Holmby Hills. She lived in the home for over 45 years and recently put it on the market at $14.5 million. It just sold for $13 million.

“Dennis Sells To Ellen”
Ellen DeGeneres is the new owner of comedian Dennis Miller's Montecito, California home for $49 million. Ellen is a longtime buyer and seller of celebrity-connected homes most recently selling another Montecito-area home for $33.3 million.