Quantum Teleportation Paper of Indian Researchers from D.E.I. University, India on Home Page of Taylor and Francis under 'Trending Research' 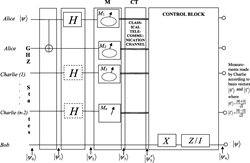 It is a unique achievement that a research paper from Dayalbagh Educational Institute (DEI), Agra, India is currently the top scoring paper of similar age on the Altmetric listening tool used widely by publishers to track discussions related to scholarly articles. To appreciate the work done by the authors, the publishers Taylor and Francis decided to give free access to the paper, "From n-qubit multi-particle quantum teleportation modelling to n-qudit contextuality based quantum teleportation and beyond", till 30th June 2017, which usually costs $50 for a 24-hour access. Probably, there is no precedence of a research paper from India in the recent past to have received this honor. The publishers have, in fact, gone a step ahead and also featured the paper on their home page under 'Trending Research'.

The authors have used graph theory to model a three particle entangled teleportation system. The content of the paper makes an intriguing reading and while a glance at the paper may perplex a layman who does not have sufficient knowledge about quantum physics and mathematical equations, it is however not so difficult to understand the underlying principles. The authors have written three preceding papers explaining quantum information processing using graph theory and the current paper has to be seen in continuation of the same.

The popularity of the paper is primarily due to the holistic approach adopted by the authors in encapsulating both the scientific usage and its possible applications as well as by subtly indicating the limits that bind us from having a complete understanding of the cosmos. Quantum physics provides the necessary scientific tools that can help measure or demonstrate phenomena that we fail to do with classical physics. It will help the user to have prior understanding of two theories, the first being the cosmological interpretation of quantum mechanics proposed by Max Tegmark which predicts an infinite three-dimensional space with infinitely many planets and infinitely many copies of any quantum system. The second theory is the Orchestrated objective reduction (Orch-OR) theory which is a hypothesis that consciousness in the brain originates from processes inside neurons, rather than from connections between neurons (the conventional view).

The paper gives an insight into the contextual manner in which information teleportation could happen when a possible scenario of quantum entanglement between three (or more) particles occurs. This opens a plethora of possible business applications in machines possessing artificial intelligence; the authors terming them as super intelligent machines. In the same breath, the paper talks about the scope of imbibing values and qualities in humans towards the development of supermen to counter any possible misuse of these super intelligent machines.

Another interesting aspect of the paper is that it highlights the limitations faced by the available measuring tools. It is stated by the authors that some leading mathematicians admit the existence of particles smaller than Planck’s dimension of 10 to the power -35 m. However, according to the authors, such particles may cease to be matter at that scale. Similarly, when measuring distances, scientists are restricted to go beyond 10 to the power 10 light years and, therefore, cannot visualize a bigger expanse. This limits their understanding of natural phenomena because everything that they measure is bound by the limitations of the available tools. Thus, scientists have a disbelief and doubt about their own discoveries in the absence of commensurate measurements. Hence, the authors suggest that further research needs to be conducted to detect particles subtler than Planck’s constant and long distances beyond 10 to the power 10 light years.

It appears that the authors hint at a blend of scientific temper with experiential knowledge based on meditation. In ancient India, Rishis were Scientists and Scientists were Rishis. Vedas and Vedangas have been sources of various scientific disciplines, e.g. Linguistics, Astronomy, Music, Computational techniques (Panini and Pingala) and reached their heights in the remote past. Kapila, Kanada, Nagarjuna, Abhinavagupta are great names in this tradition who made great contributions to secular sciences as well as spiritual knowledge. Even the scientists of other lands and cultures like Plato and Pythagoras were considered Rishis in their own right. The tradition of scientists being endowed with intuitional wisdom continues in India. Dayalbagh has more than a century-old tradition of appreciating modern scientific techniques, while being strongly moored to the Religion of Saints (Radhasoami Faith, Dayalbagh). In fact, the senior most author of the paper is Revered Prof. Prem Saran Satsangi, Chairman, Advisory Committee on Education, Dayalbagh Educational Institutions, Dayalbagh, who is a world-renowned authority in systems science, and is the Spiritual Head of Radhasoami Faith, Dayalbagh. The first author is Dr. Dayal Pyari Srivastava, a faculty member in Department of Physics and Computer Science, DEI, and the second author is Dr. Vishal Sahni, Chair Professor, Quantum-Nano Systems Centre and Centre for Consciousness Studies at DEI.

Based on modeling theory of mathematics, logic and induction, the authors conclude that as we find particles of sizes even smaller and subtler than Max Planck’s dimension of 10 to the power -35 m, we approach particles that belong to Universe of Mind and Universe of Spirit Force, and they have no problem in understanding the heat and light. They perceive it as very blissful, musical and their ultimate abode.